Looking to buy a digital camera? We explain the difference between Compact, DSLR and Mirrorless camera types

I’m often asked for recommendations to buy a new camera. There really isn’t a right answer, especially when it comes down to different brands. However, if you understand the camera types that are available then you can start to narrow down the choice. In the consumer market, there are probably three main camera types. They are Compact, DSLR and Mirrorless Cameras. Let’s look and understand what the differences are between these three options.

Compact cameras could sometimes be thought of as an entry-level camera. However, there are some compact cameras that can deliver high-end results. The definition of a compact camera is that it has a fixed lens attached to the camera. This means that you will only be able to use the zoom built into the camera. You won’t be able to change the lens to get either a wider or longer focal length.

A compact camera tends to be quite light. To achieve this weight advantage a compact camera tends to have a much smaller sensor than either a DSLR or a mirrorless camera. (This isn’t always the case, the Leica Q2 for example, has exactly the same sensor as a high-end mirrorless or DSLR camera). Most cheaper compact cameras though will have smaller sensors. This can result in reduced image quality, particularly when shooting at high ISO values. You should also be aware that the smaller then sensor size, the less likely you are going to be able to achieve that blurry bokeh effect.

One of the advantages of compact cameras with small sensors is that they can often have an incredible zoom range. The Panasonic TZ70, for example, has the equivalent zoom of a full-frame DSLR from 24mm – 720mm! That would be an awful lot of kit to cart around for a DSLR but weighs in at just 243g for the compact camera.

This is what people will often refer to as a ‘proper’ camera. The terms DSLR explains how the light is directed through the lens and into the eyepiece. It stands for Digital Single Lens Reflex and is best understood in the simplified diagram below. Light comes in through the lens and hit a mirror which is angled at 45 degrees. The light bounces upwards where it hits a second mirror. It is then directed to the eyepiece where we can set up the shot. When the shutter button is pressed the first mirror is lifted upwards allowing the light to hit the sensor of the camera. 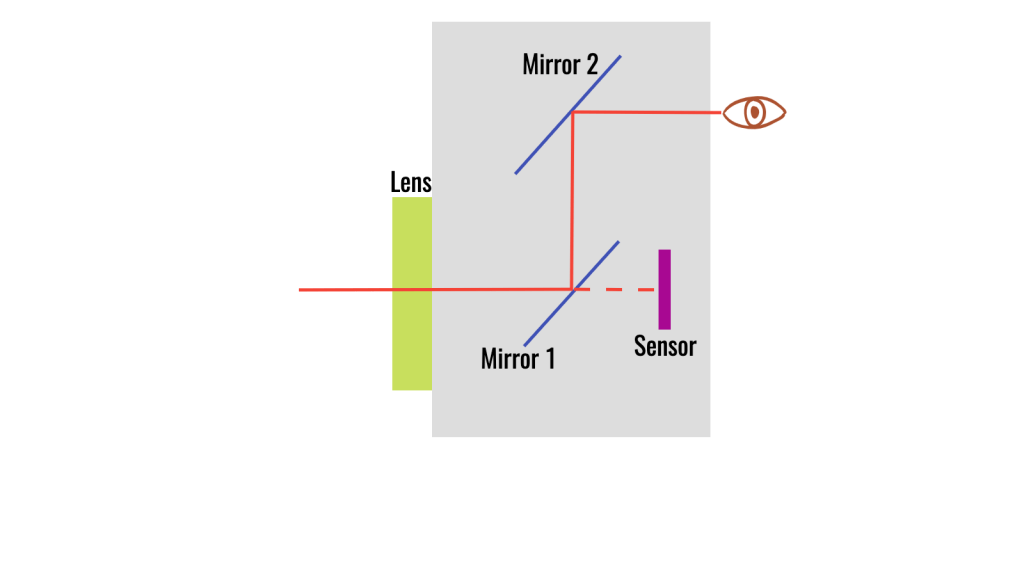 Because of the mirror mechanism, a DSLR will tend to be heavier than a compact camera. It will also be louder as the mechanical movement of the mirror creates the clunking sound you may be familiar with.

The main advantage of a DSLR (and also a mirrorless camera) is that it is possible to change the lenses offering different focal lengths. This will mean that it would be possible to attach a fish-eye lens giving almost a 180-degree view through to an extreme zoom to the same camera body. One thing to be aware of is that manufacturers will often produce lenses that are only compatible with cropped frame sensor cameras and cannot be used on a full-frame camera. An example of this is the EF-S lenses cannot be used on full-frame cameras whereas EF lenses can be used on both cropped and full-frame sensors.

The final camera type is known as a mirrorless camera. This is in most respects the same as a DSLR. However, the mirror mechanism in the DSLR is replaced by an electronic viewfinder. This means that mirrorless cameras can often be much lighter than their DSLR equivalents.

Just like DSLR’s, mirrorless cameras can have different lenses attached to them. Because the lens is much closer to the sensor due to the lack of mirror camera manufacturers will produce lenses specific to the mirrorless systems. However, both Canon and Nikon have released mirrorless camera systems that can use an adapter so that DSLR lenses will also work on mirrorless cameras.