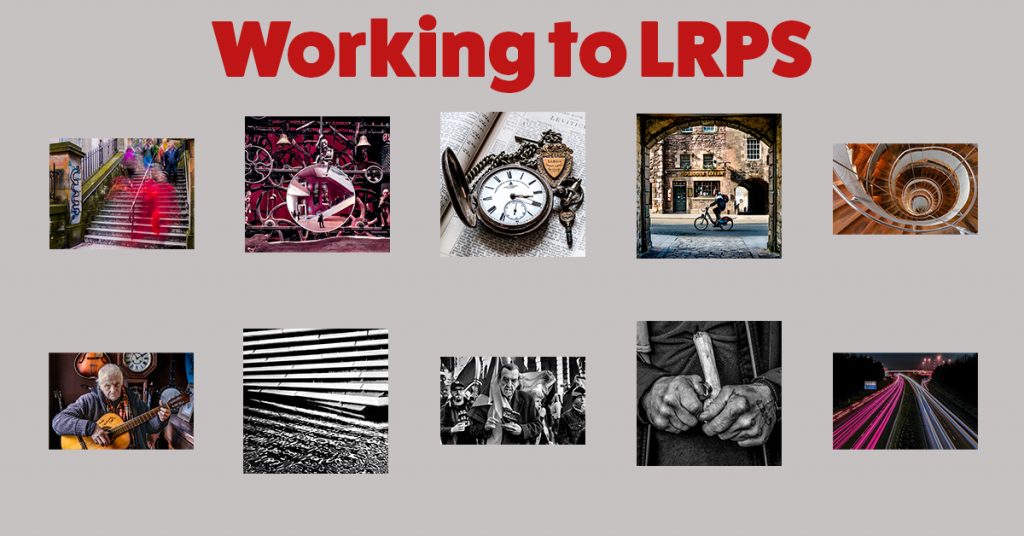 In last week’s blog, I talked about resolutions that you could make to help improve your photography. One of my suggestions was to start a photography project. This week I have interviewed Billy Waugh, who attended a Switch to Manual Workshop in 2017 and did just that in 2019. His project was to successfully gain the LRPS distinction with the Royal Photographic Society.

Billy has always been interested in photography from around the age of twelve. His first camera was a Kodak disk camera which allowed him to take 15 exposures at a time. He then progressed through other cameras to the point where he started to take photography more seriously around 10 years ago. He now enjoys taking street photography, particularly where he is capturing people interacting in the natural environment, and identifying strong shapes that can create photographic interest. Many of the images in Billy’s successful LRPS panel show these influences.

I firstly asked Billy to describe what the LRPS distinction is. He said, “It’s the Licentiate of the Royal Photographic Society (RPS). It’s the first level of distinction award available through RPS. For the award you need to produce 10 images of various subjects, using various techniques and camera settings that show the capability to take good photographs. The ten images are assessed by a panel of experts from RPS to decide if you meet the criteria.”

Before we look at some of the photographs from the successful panel, I wanted to find out what the motivation was to try and achieve the LRPS distinction. Billy works in a team who are learning professionals and all have qualifications for the work they undertake. However, with his team becoming aware of his transferrable skills he ‘fell into the role’ of photographer and videographer through his interest and capability in taking pictures. Billy felt the need to add some recognised qualification and so embarked on a 10-week Open University course, run in conjunction with RPS. The course introduced him to the various levels of RPS distinctions and he thought this would be a good way to raise his own professionalism in his role.

There was also a personal aim which was to find ways of getting better at photography. As Billy works full-time, it is very difficult to find courses that can achieve a formal accreditation which fits around the day job.

How do you approach taking 10 photographs for the panel?

Billy started off his personal project by getting to grips with the guidelines that RPS provide for each of the distinction levels. The panel for LRPS doesn’t need to have a theme but needs to show a wide variety of techniques. He admits it took a while to get the ten images together.

“I didn’t just pick up my camera one day and go there’s the photos, bang, bang, bang”

He explained how he would think about wanting to display a particular technique, such as a close in detail shot. He would often spend a whole day trying to achieve the image he wanted, such as the photograph of the pocket watch sitting on top of the bible. “These things had been sitting about the house since I was a child. The items are probably a hundred years old each. It now feels like they have been sitting there waiting this year for me to use them”, he laughed. 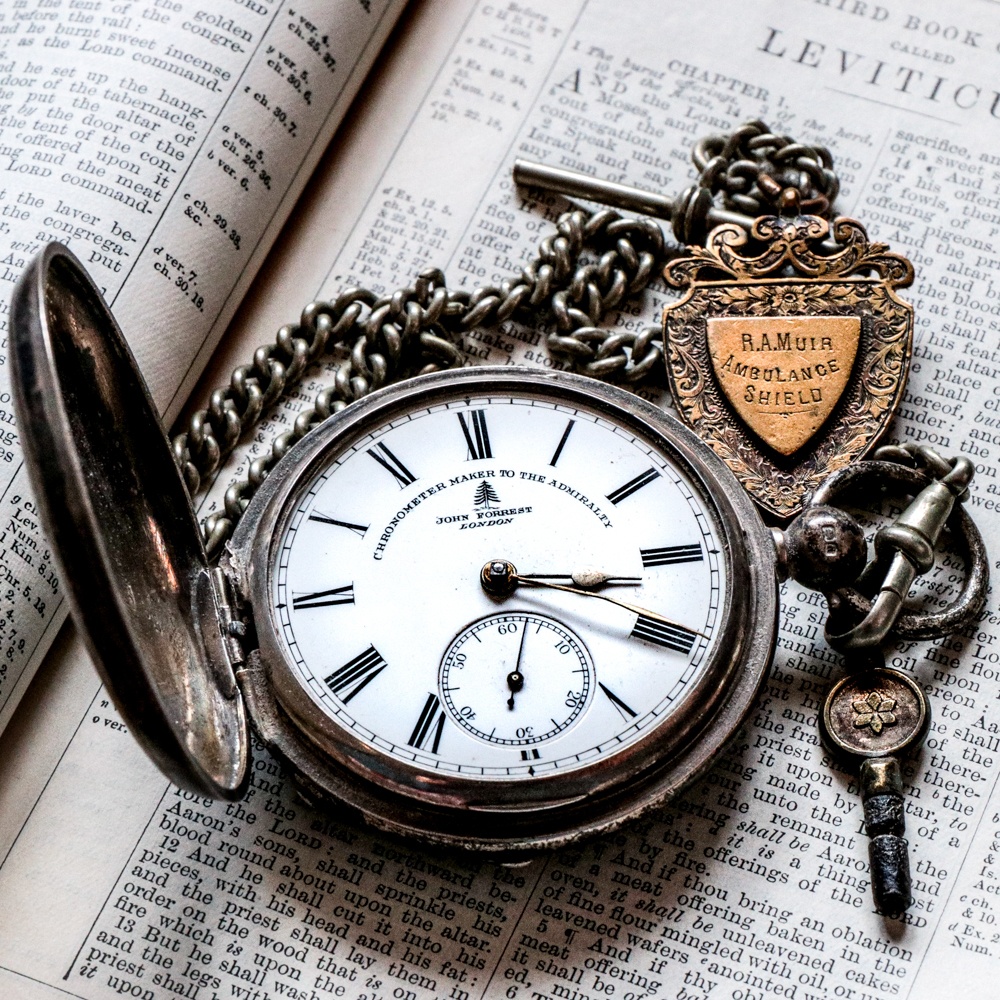 Billy went on to explain that the panel he submitted had quite a few chops and changes from the first ten he selected. Part of the process in pulling the panel together involved speaking to people, attending the RPS Advisory sessions that take place around the country and seeking advice online from RPS. When Billy attended the Advisory Day in Bridge of Allan, only seven of the original images he had in mind went into the final ten that was eventually assessed.

The start of the process for Billy began back in February of 2019. He confessed that it felt this entire year had been toward producing ten photographs and toward the end, he joked saying he was almost sick of the sight of the final ten! However, this is where reaching out to others helped. I spent a few hours with Billy earlier in the year trying to give him some pointers and it was great to see some of the suggestions come out in the successful panel.

I asked Billy if the previous twelve months of working toward the LRPS distinction had improved his photography. He thinks the first change in his photography has been that he takes far fewer photographs. “I think a lot more about taking a photograph now. Rather than just snapping a scene and coming back with two hundred photos. I now think more about the end product whilst taking the photograph.” I thought this was great that Billy had achieved the aim of his project to professionalise his craft.

Another area where Billy has developed has been in the use of editing software. Billy uses Adobe Lightroom. He had a particular problem with one of the images as there was a colour cast on the skin of the guitar player. As he didn’t know how to remove this he used the internet to give him some tips and pointers to fix colour casts. A skill he can now use and will be able to apply in the future.

Now we’ve looked at the process I thought it would be good for Billy to share his thoughts on a few of the photographs. He started by talking about the first image in the panel which is a long-exposure image taken during the day time.

“When we met a few months ago we spoke about this one. You suggested that the location would be a good subject. A few weeks after speaking about that, I kept checking the weather and returned to Edinburgh on a nice day. I set the tripod up and added a filter to the lens to capture the movement. I then waited and waited for the right person. All-day I waited for a person in a red jacket – I’m sure there was a shortage of red coats in Edinburgh that day! This particular shot was right at the end of the day, I’d almost had enough and was about to pack up for the day. I saw a person at the top of the stairs wearing this red coat and so waited for them to come all the way down and then managed to get the shot I was looking for.”

“Image number two is the Millennium Clock in the National Museum of Scotland in Edinburgh. I really liked all the intricate cogs and wheels and chains. In the mirror, you can see me taking the photo. I like seeing a  big close-up of the insides of the clock but there’s also a tiny person in the mirror. It’s kind of an artistic selfie.” 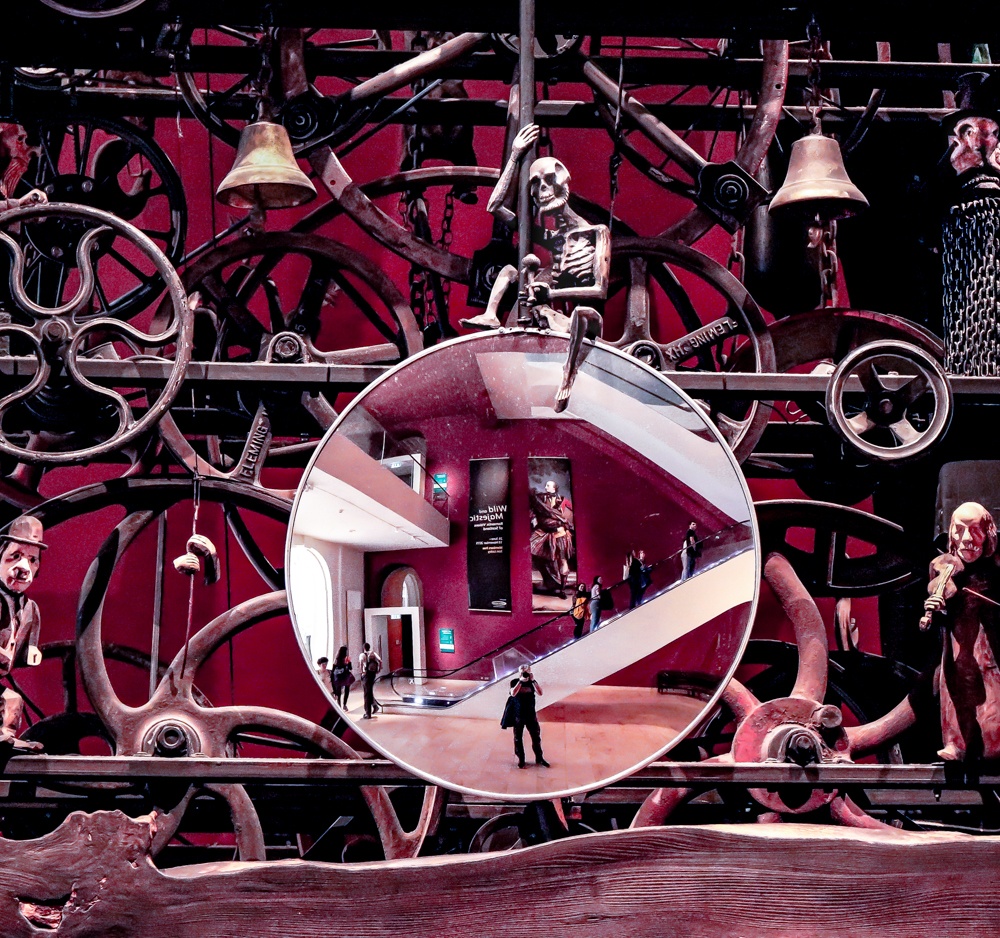 The final photograph we talked about was taken on a Scott Kelby Worldwide Photo-walk that I organised in Edinburgh in October 2018. The photograph was chosen as the best image of the day.

“I’ve had a fair bit of success with this one. In the photo walk, I submitted it as just a portrait of the guy. For the panel, I expanded to include the other people in the photograph. I was fortunate that the three other people are all blowing whistles whilst he is smoking a cigarette and he’s given a funny look. It was taken during an Independence march and I noticed there was a lot of activity where the Union supporters were standing. I knew if I stood with them that I’d get some interesting photos. The guy is staring at these supporters which is probably why he has the expression on his face which I thought was fantastic.” 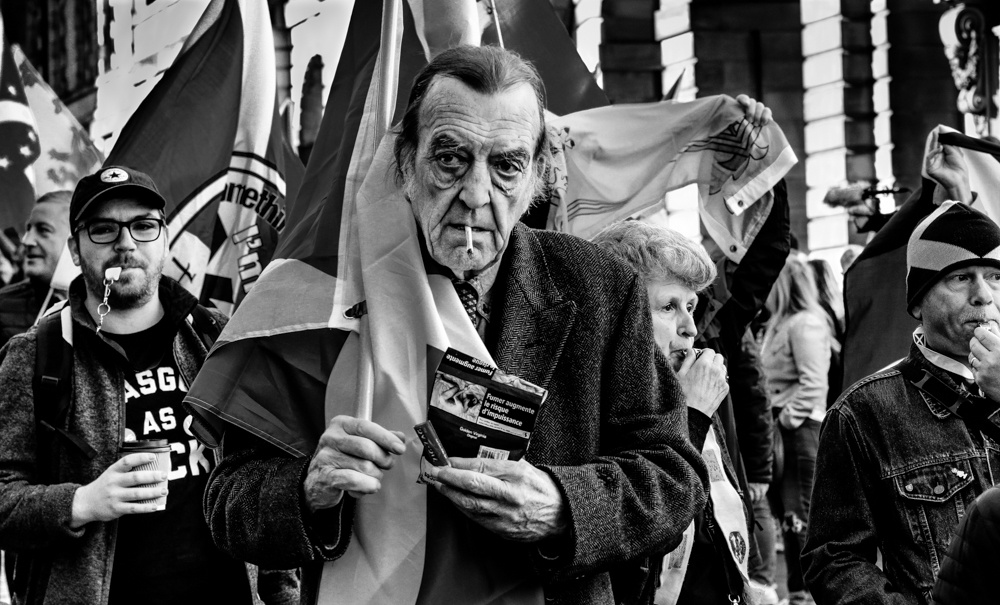 By positioning himself at a place where he thought something may happen, Billy really shows the more cerebral way he has changed his photography. I was struck that Billy thought he was fortunate to capture all these things coming together – sometimes luck is as a result of working to get in the right place at the right time.

“Although it was a photo-walk, I think I probably walked about 200 yards and spent two or three hours at that one point waiting for something to happen!”

To complete this enjoyable chat, I asked Billy what tips he would give to someone that was interested in working toward LRPS.

His first tip was one I used, “On the RPS website, there was a gallery of successful panels. It’s recently had quite a few removed as the society has redesigned its website. I’m hoping they’ll put all the panels back up again. If someone’s looking to do the LRPS distinction study the panels, look at the different subjects and the techniques that they are using.”

Billy also talked about the importance of The RPS Advisory days. If there’s a panel you are working on then people who form part of the group that will judge panels can give you advice on the images as well as how the panel itself works together. The unofficial eleventh image is the panel as a whole. All ten images should look good as a collection when viewed from a distance as well as individually being good photographs. When the panel goes up on display, you want your images to catch the eye of the experts straight away. As well as the Advisory Days, RPS also offers days where it is possible to view successful panels for both the Licentiate level as well as the Associate distinction which is the next step up. Billy thought it was good to see the level above because you could aim for that quality of photography and hopefully give yourself a cushion to ensure that your LRPS panel would be successful.

Billy’s final tip is, “Before sending your mounted images off to RPS make sure you are really proud of them and you don’t have any niggling doubts.  So no matter what the outcome is you know that you have done your very best”.

I asked Billy if he now had thoughts about progressing to the next level and seeking an ARPS. He has thought about it but admitted that the process had been quite a drain over the last twelve months. He now wants to have a bit of a break and get back to having some fun in photography.

“I’ve been looking at 10 images for the last 12 months. I do want to do it at some point but for now I want to have some fun.”

All photographs accompanying this week’s blog are the copyright of Billy Waugh and have been used with kind permission. You can see more of Billy’s photos, including the successful LRPS panel on his Instagram account https://www.instagram.com/billy_waugh_photo/