Off the West coast of Scotland is an island populated by just over 200 people. It’s not on the photographer’s bucket list, but it hides some great locations 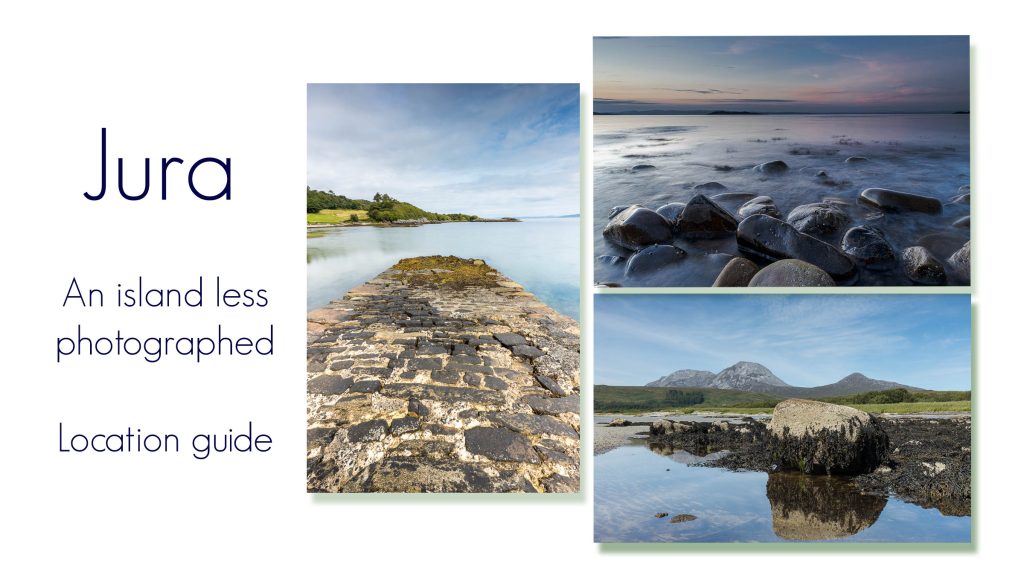 As we have started to come out of COVID lockdown, we can travel away from the area we live in. Photographers are already flocking back to the often captured locations of Glencoe and Skye. I am sure that if I go back to the famous viewpoint looking toward Buachaille Etive Mor that the tripod holes have already been driven back into the peaty ground around the waterfall as everyone strives to get the same shot. Last week, I headed over to the remote island of Jura and thought it would be good to share some photographs from the trip to show that Scotland has much more to offer.

You’ve got to be prepared for a long trip to get to Jura. If you’re prone to sea-sickness, then have some tablets at the ready. The easiest way is to drive to the ferry-port at Kennacraig, which is three and a half hours from Edinburgh. There’s then a two-hour ferry trip using Calmac to Islay – there are two ports on this island famous for its Whisky, Port Ellen and Port Askaig. Ideally, you’ll go to Port Askaig as landing in Port Ellen will then involve a 30-minute journey across the island to reach the Jura Ferry’ Eilean Dhiura’ which will take you across the Sound of Jura in about 10 minutes. Once that crossing is complete, you’re only 14 minutes away from the only hotel on the island at Craighouse. 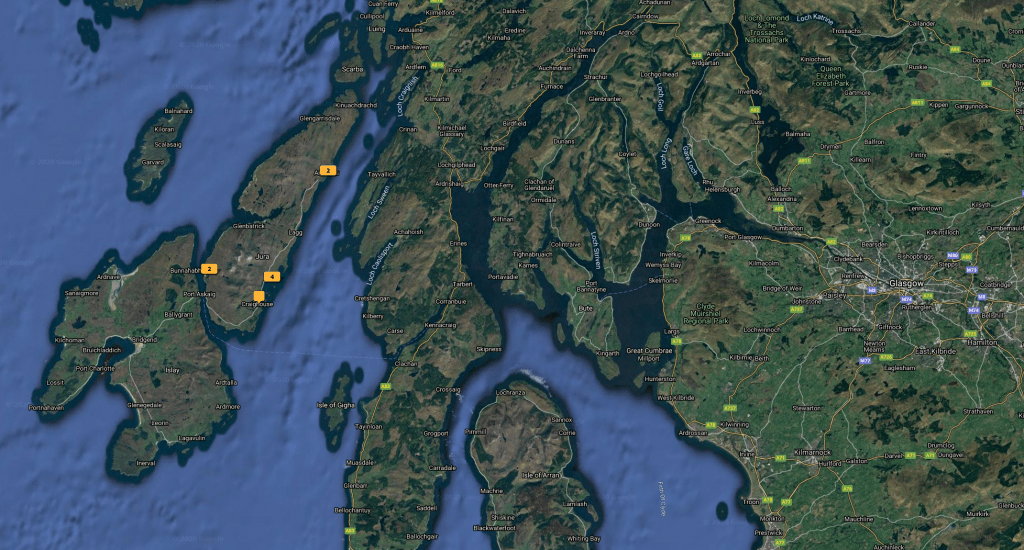 It is possible to fly from the mainland to the small airport on Islay and then hire a car to cross over to Jura. There is also a way to get to Jura from the mainland using the Jura  Passenger Ferry. It’s a one-hour rib-trip from Tayvallich and is definitely not for the faint-hearted if there’s even a small swell on the crossing to Jura.

As you can see, it isn’t easy to get to Jura and once there it’s also a challenge to get around. You’ll need a car (or a friendly local) to get around the island. There’s one 25-mile long road that goes up the east of the island. It starts at the ferry-terminal at Feolin to the end of the public road on the Ardlussa Estate. The west and northernmost parts of the island can only be reached with long treks or by the sea!

Is it worth it?

I won’t sugar-coat it. Jura is an island that you need to suffer a wee-bit to get some beautiful photos. However, not all locations need massive walks. Quite a few of the images I will share in this post are taken just off the road. I’ll also admit that this is in no way a comprehensive guide to all the locations on the island, but it will hopefully give you a feel for the type of photography possible.

One last warning before we start to look at the various locations on the island. From May to early Autumn, Jura hosts an evil predator which swarms onto the island, causing harm and irritation to the residents and visitors. Be prepared for the Scottish’ midgie’. Midges will come out in the late afternoon and hang around until dawn. They are particularly attracted to warm things and bright lights – things like the screen on your digital camera so cover-up with mosquito net hats, wear gloves and be prepared to be irritated!

The hub of Jura is the capital of the island, Craighouse. The village has one pub, the famous Jura whisky distillery, a post office and shop, a fuel pump and a small collection of shops including a rum distillery and a photographers gallery featuring the work of a professional photographer who lives on the island, Konrad Borkowski.

There are some great views of the three mountains that dominate the island. They are collectively known as the Paps of Jura. The largest, Beinn an Oir is 785m tall with the other two mountains Beinn Shiantaidh and Beinn a’ Chaolais also rising over 700 metres. The best views of the hills are looking back over the village from the Old Pier. 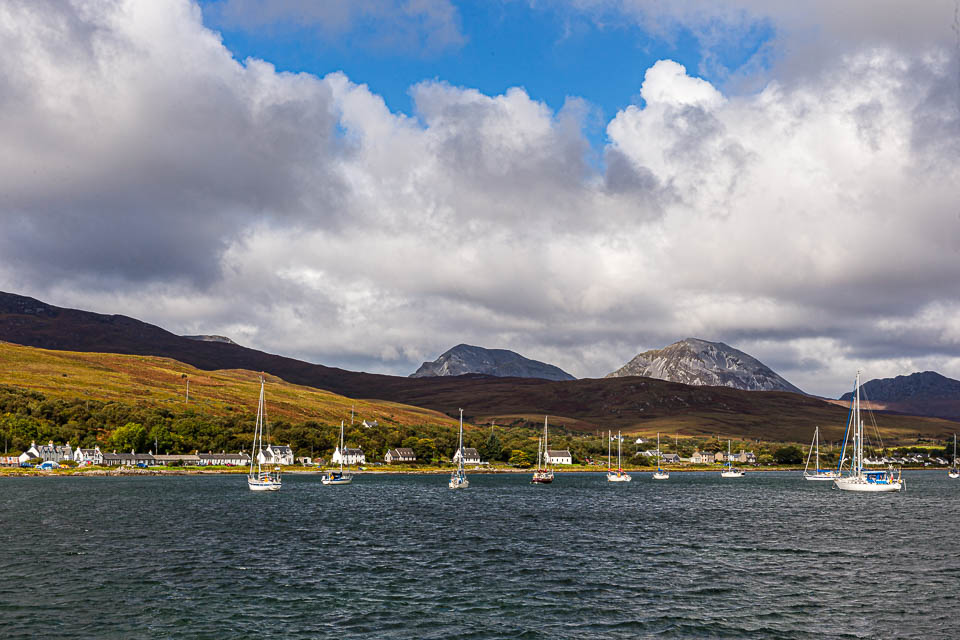 During the summer months, Craighouse can see some spectacular Sunrises looking out over the Small Isles Bay. There are often small yachts in the harbour which can add interest to the beautiful coloured skies. While this location points toward the east don’t think that it can only be a sunrise location. Often in the evenings, the sky will display some pretty muted tones, so don’t put the camera away. 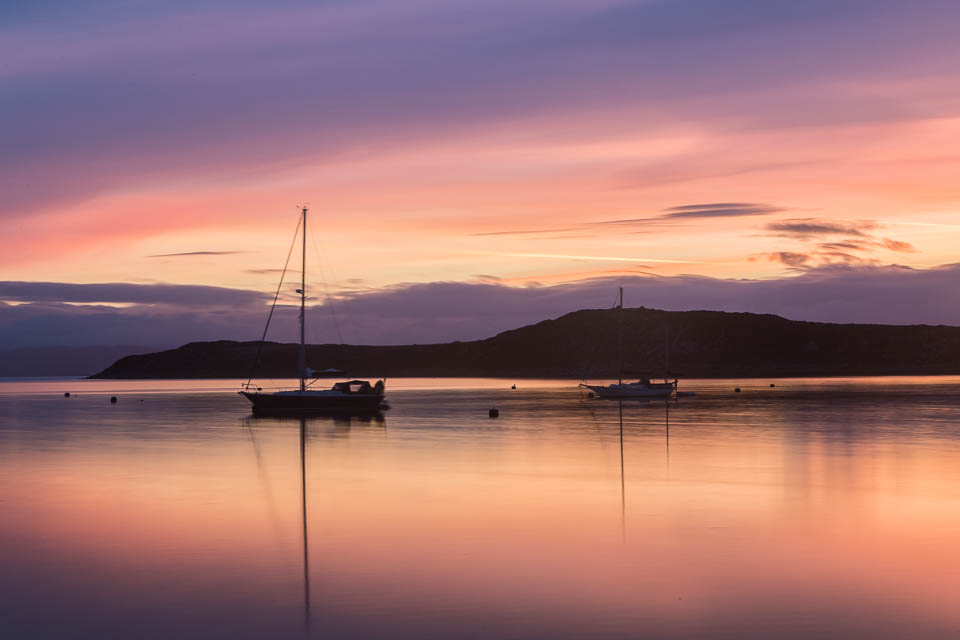 For those who follow my Instagram account, you’ll know that I like to take minimalistic photographs. There are plenty of opportunities to do this kind of photography. I love shooting the old pier from the slipway in front of the whisky distillery. 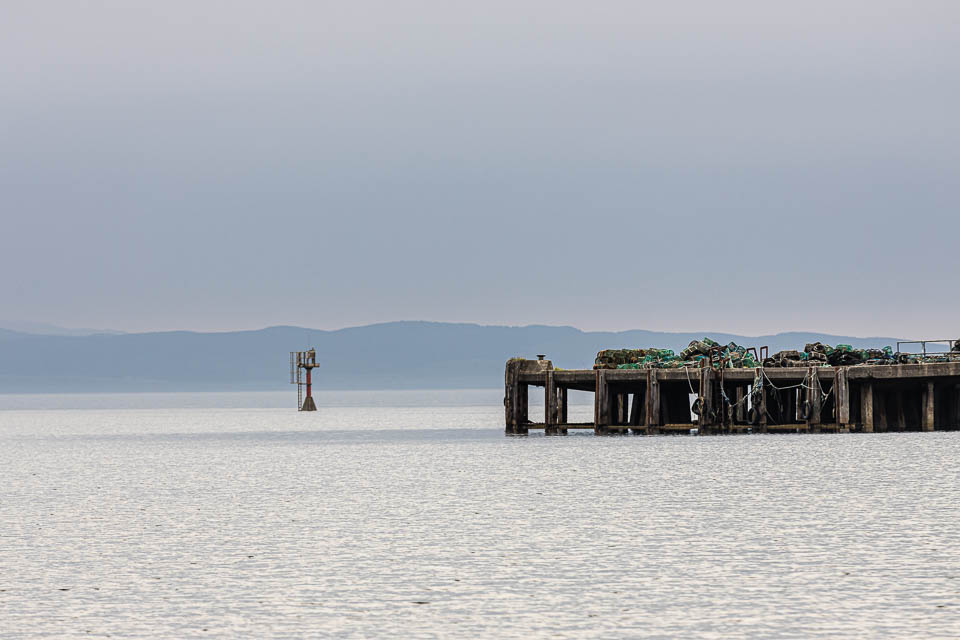 Leaving Craighouse and travelling toward the north along The Long Road, there is a nice little stopping place for sunrise shots. I took the next couple of photographs after walking for about 40 minutes. There’s also parking for one or two cars at the side of the road for the less athletic. You can get down onto the beach level at the pier and then walk back in the direction toward Craighouse. There are some lovely rounded stones on the beach which make for superb foreground interest for a sunrise shot. 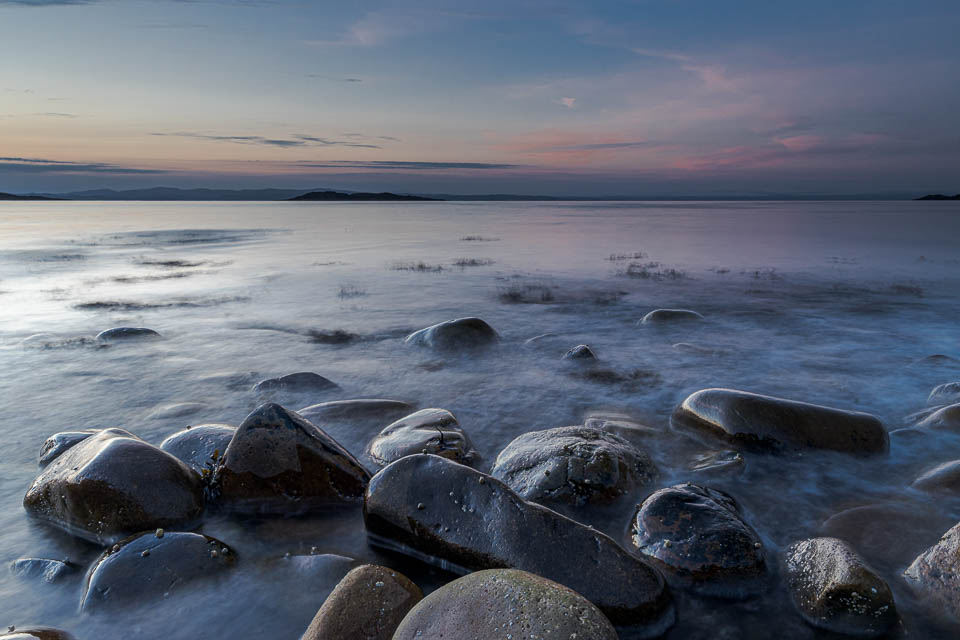 If you spend some time just before sunrise shooting the rocks in the last photograph, then you’ll be treated to a spectacular massive sun shot as it rises over the hills of Argyll. This is a great example that disproves the great myth from last week that all landscapes need wide-angle lenses. The shot was taken with a 70-200mm lens with a two times extender. The darker area which is on Jura feels like it sits next to the hills in the background, which are nearly 15 miles away. Don’t forget your long lens when shooting landscapes. 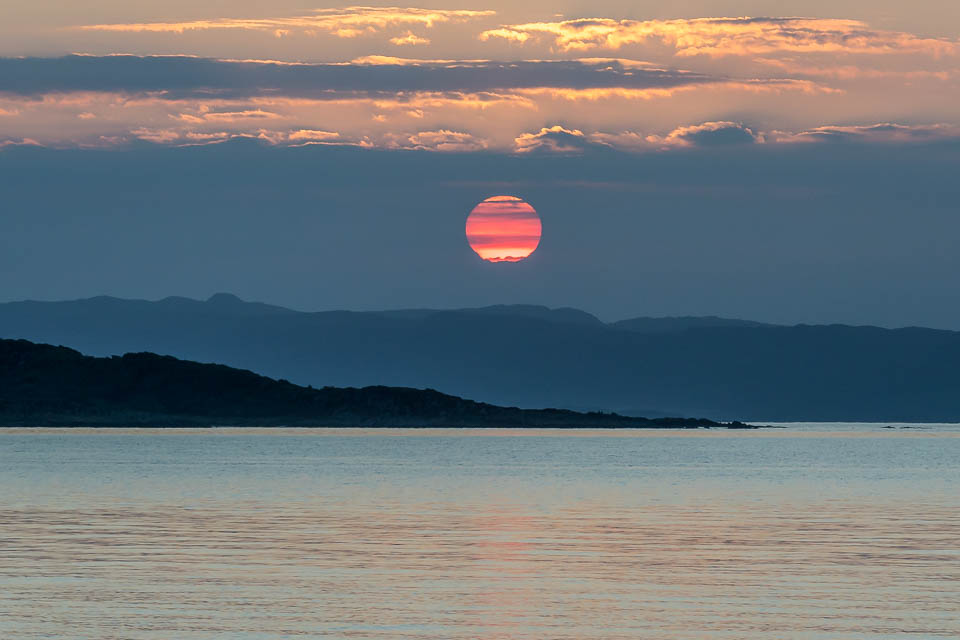 One of the benefits of Jura in the current COVID era is that it is very easy to socially-distance. The Corran Sands beach stretches for about 1 kilometre around the north of the Small Isles Bay. On the day we visited last week, there must have been about 20 people (around 10% of the island population) on the beach, so there’s plenty of room for everyone. The beach is accessed by following the signs for Knockrome and then taking the first right turn. There is parking on ground just in front of the beach but take care not to block the small airfield. Jura doesn’t have a hospital, so anyone needing emergency care is airlifted from this site.

I think that this is the most accessible place to get some wonderful views of the Paps. There’s often delicate flowers in the grasses that border the beach which can be used to frame the mountain peaks. 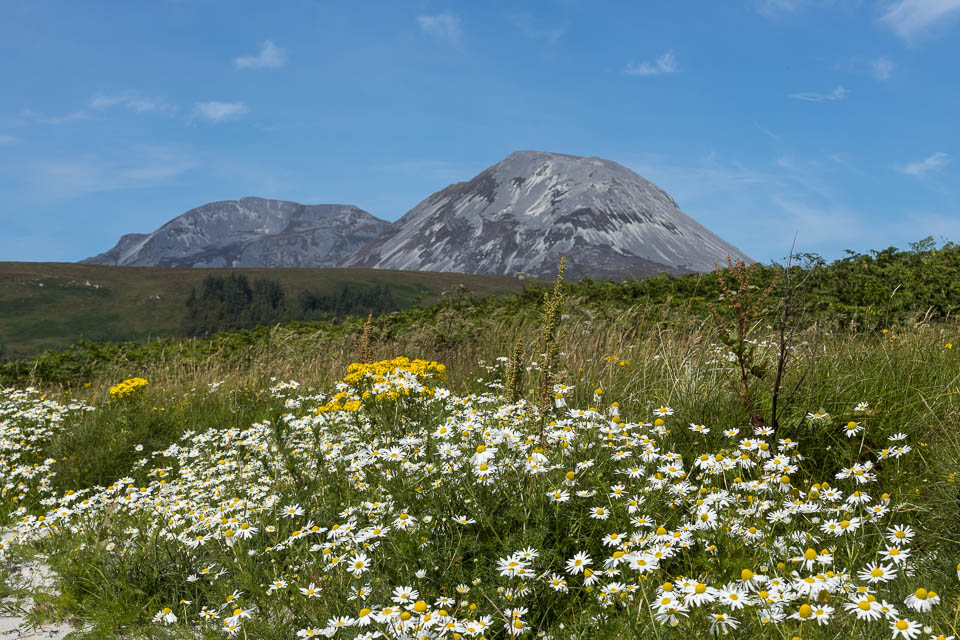 Walk further around the bay and the tides create pools of water. I found a boulder in one of the pools that contrasted well against the majestic mountains as well as reflecting the gorgeous blue sky that happens every day on the island. (Well maybe not every day, we were just lucky on this visit). 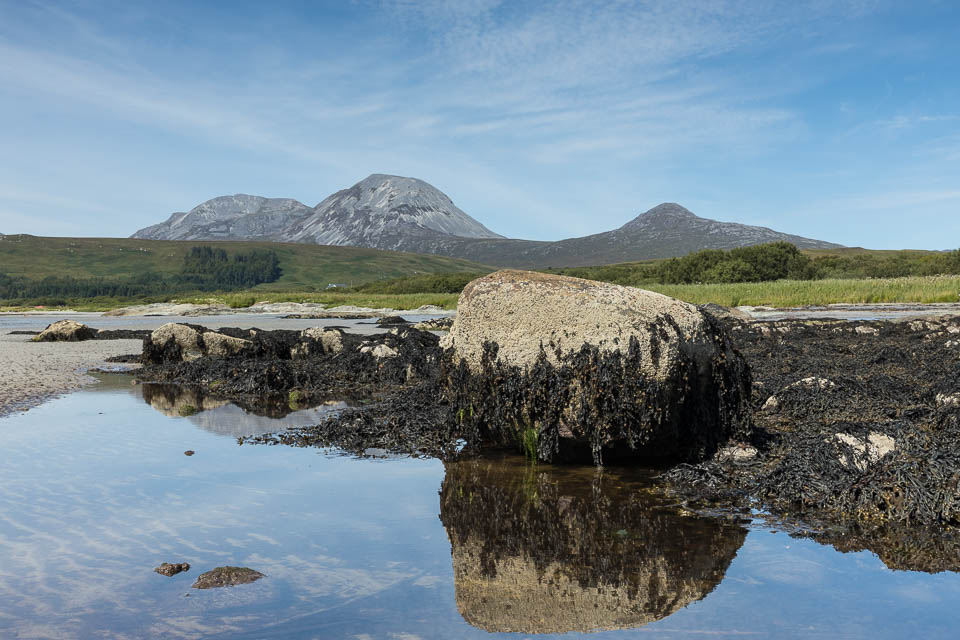 The last of the locations that we’ll look at which are accessible by a short walk off the road is toward the North end of the Long Road. The Ardlussa estate is home to one of the latest exports from the island, Lussa Gin. It is produced from 14 different botanicals, eleven of which sourced from the estate itself. One of the botanicals is bright green sea lettuce that is in abundance in Ardlussa Bay, a couple of minutes drive from the tiny distillery.

There are a couple of shooting points that work well. The first is the jetty that stretches into the water. Long-exposure shots work well in this location, smoothing out the water to contrast against the stone of the dock. 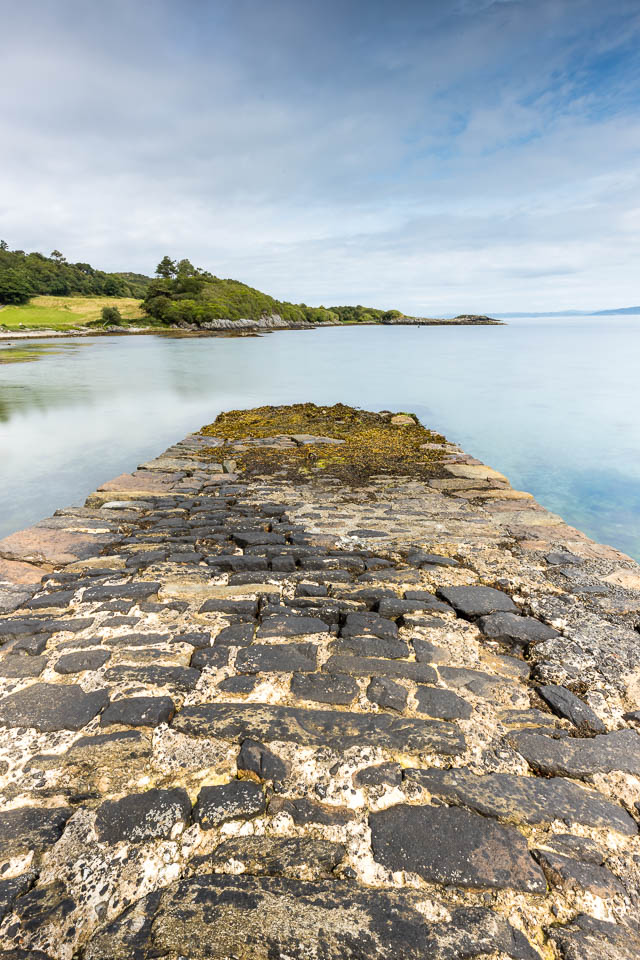 In front of the pier is a small chunk of rock that points out into the bay. Covered in lichens, the stones provide a super foreground to a broader shot of the bay. It also helps that there is often a red rowing bed left in the bay. An intense colour will draw the viewer, so placing it toward the middle of the scene ensures that your photograph will keep them interested in your shot. 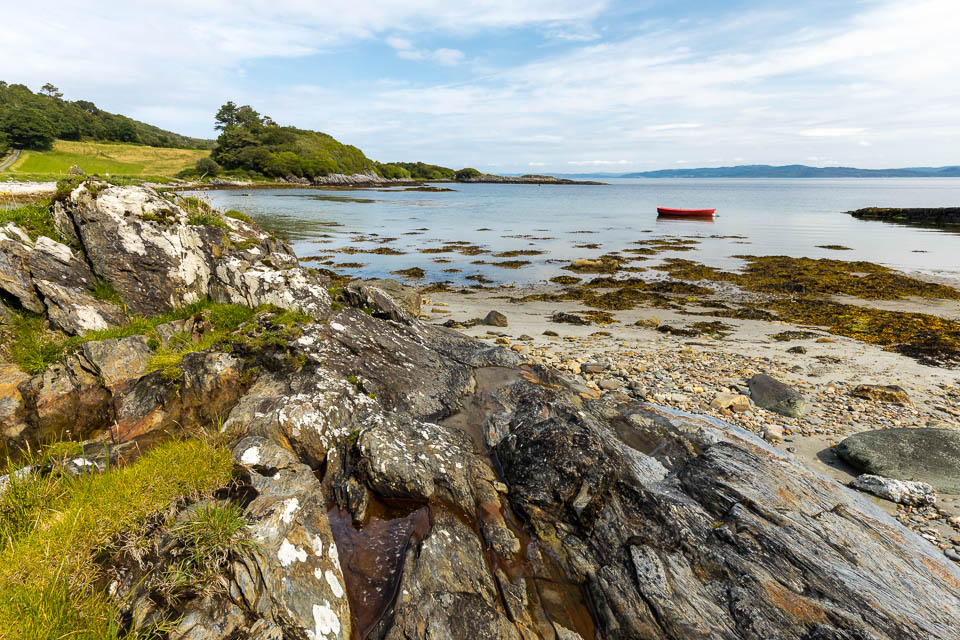 The first of two ‘off the beaten track’ locations is Cnocbreac which is a two-mile walk from the Feolin Ferry. Walking away from the pier, there’s a private road heading up a hill to the left. Vehicle access isn’t allowed on the Inver estate, but walkers are welcome. Follow the cliff-top path with some spectacular views to Islay, until you reach Inver House and bear to the right. Eventually, you’ll reach a river crossing and just beyond is a derelict hamlet of stone houses dating from the mid-1800s.

One of the houses would have had a spectacular view of two of the Paps.  Including it as part of the scene, gives us a flashback to the harshness of life on the island in the past. 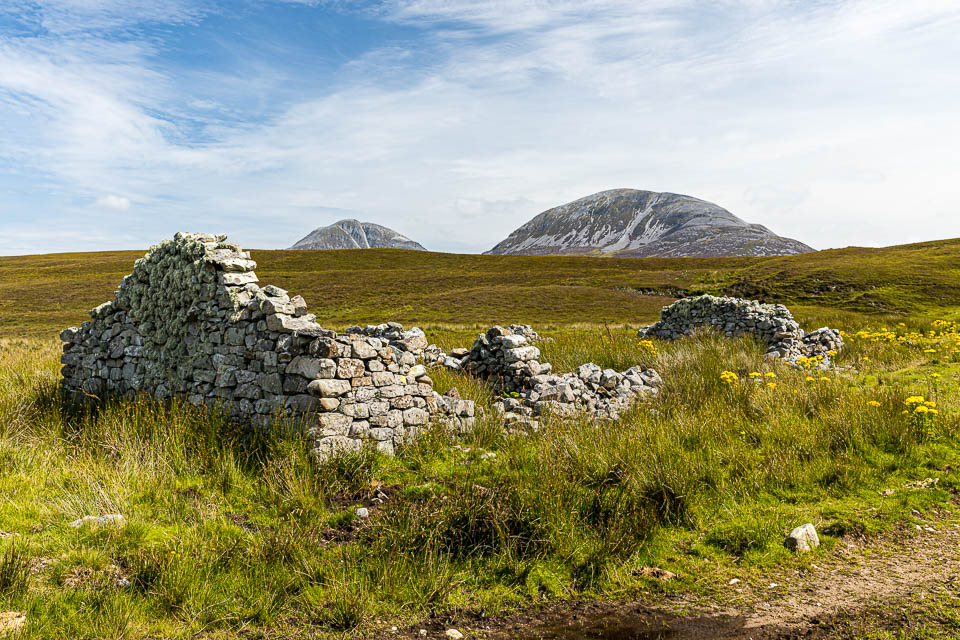 There’s a mud-track that runs to the right of the house ruins. Follow this to a hill and clamber to the top. There is one of the few low-level views where it is possible to see all three peaks of the Paps at the same time. At this time of the year, the purple heather provides a touch of colour to the pastoral scene. 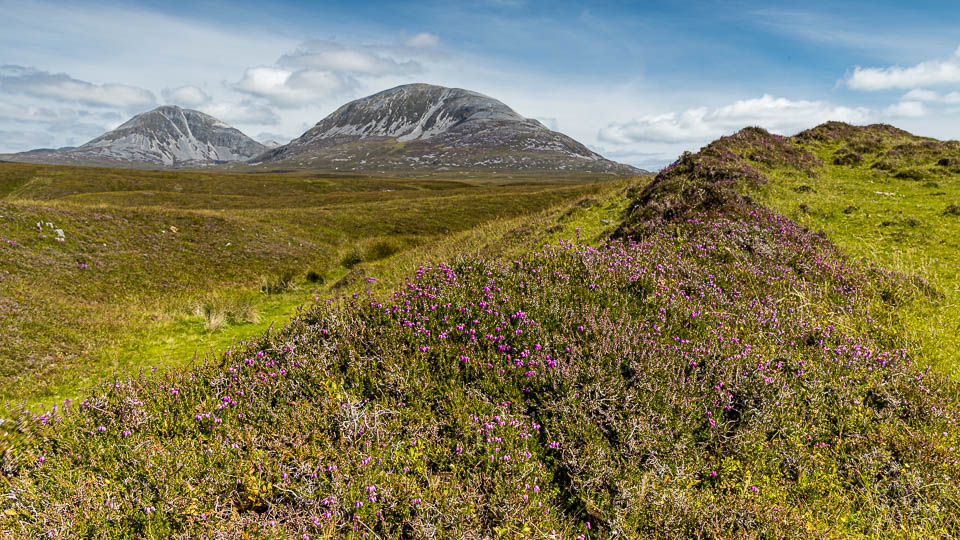 The previous location was a fairly long but easy walk. The final place in this series of Jura locations needs an even longer and much more intense walk-in to reach the site. The trail is about 3 miles each way and starts from the turning to the Corran Sands beach (known as the Three Arch Bridge). Follow the path to the right of the bridge towards the Paps until it reaches a wider pathway. You can follow any of the many tracks over the boggy ground. If you are attempting this location, then come dressed with good boots and walking trousers.

Eventually, you’ll reach a river leading to the loch. For those who want extra exercise, you can cross here and climb one of the Paps. I pushed on to reach the loch where we treated to phenomenal reflections of two of the Jura Paps. It’s definitely worth the effort of this long walk to capture this magnificent scene.

I hope that this week’s blog has shown that there is more to the scenery of Scotland than the classic views. Head to Jura, and you’ll be surprised by the diversity of the landscape and hopefully take some more unusual photographic locations. However, if you go to Jura (or indeed any other rural parts of Scotland) then be respectful to the residents. The infrastructure of Jura is limited due to its population size. There aren’t gangs of council workers cleaning up after you so take your rubbish with you. Tourism is a significant part of the economy, so support the local enterprises. Be careful when you are on the hills – medical treatment isn’t as accessible as it would be in a city. Enjoy your time in an island less photographed.