An interview with Chris Close, the owner of Edinburgh’s only commercial gallery dedicated to photography 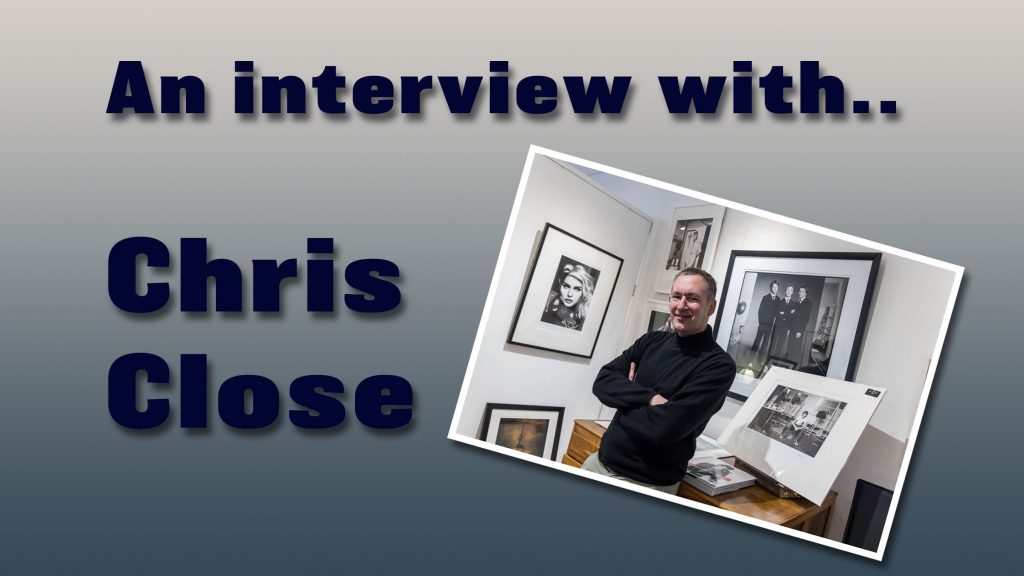 If you subscribe to my monthly newsletter, you will have noticed that I always promote an exhibition related to photography taking place during the month. I have featured events at Gallery Close in Edinburgh a couple of times. As this is the only commercial photography gallery in Scotland’s capital, I thought it would be interesting to chat with Chris Close, the owner, about his photography and the gallery.

I first came across Chris at the Edinburgh International Book Festival. The event used to take place in Charlotte Square Gardens. Photographers had an area to take headshots of the authors speaking at the event in one corner of the grounds. Chris had his own space just before the group area, where he would take very distinctive portraits of the authors. By the following morning, they would be printed and put on display. I started by asking him how this came about.

Chris studied in London, and while he was a student was quite shy. As a result, he enjoyed landscape photography. Being in the open meant not interacting with people, and so early in his photographic career, he was known for just shooting landscapes. He progressed to shooting commercial environmental shots, including subjects such as shipyard workers and the like, but his portfolio was missing what Chris refers to as “vaguely interesting people”. To cover this gap, Chris contacted Frances Sutton, the Press Manager for the festival, without really having a plan of what to do with how things would work or what would happen to the photos.

The Book Festival agreed to let Chris run his project but attached some rules. The photos couldn’t be sold for editorial use, so the snappers in the corner didn’t have their income impacted. The images couldn’t be framed, which led to them being printed on canvas and hung on the tent ropes. The idea was that it would be about 20 shots that could enhance Chris’s portfolio – the result was a significant body of work of over 100 portraits and available in a book, “Between the Lines Portraits of Authors”. 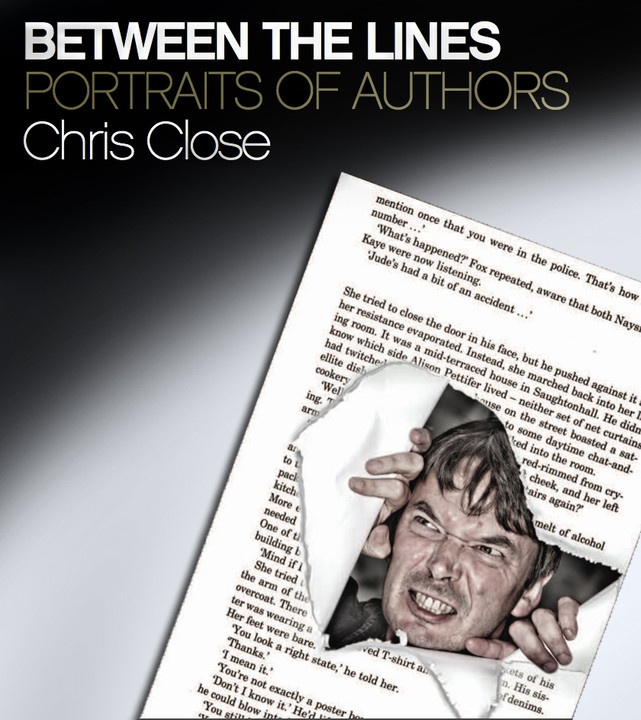 Chris recounted his experience with one of the subjects, the musician Nile Rodgers. Having sold over 75 million singles and working with artists such as Lady Gaga, Diana Ross and George Michael, Chris expected the star to have a whole entourage of minders and hangers-on. He was surprised when Frances told him that Nile was more likely to be sat with the old ladies at the Book Festival, having a cup of tea.  The shoots at the festival can last between five and thirty minutes, and the Rodgers one was one of the longer ones. The picture published from the session shows the famous dreadlocks of the artist covering his face. Chris reflects that this shot from quite a few years ago becomes more relevant today with the use of face-masks. “if it were available in a gallery in New York, the print would sell several times over”, he adds. 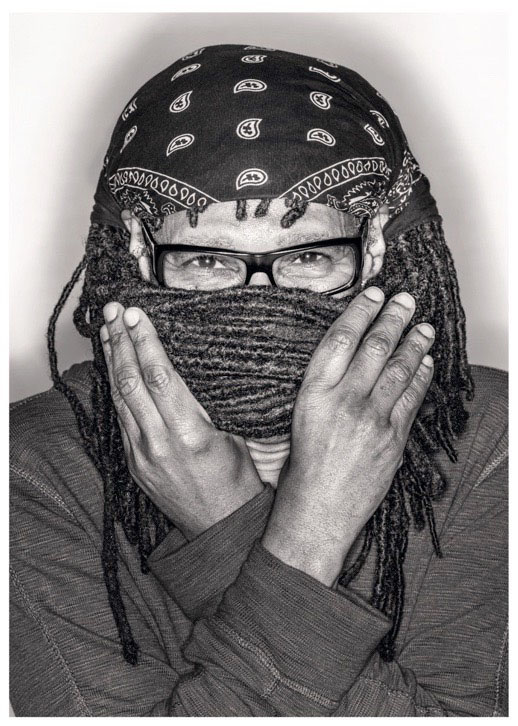 This leads me to ask if the Book Festival project achieved its aims. Chris confesses that he has only received one or two commissions on the back of it in reality. “Edinburgh is a strange place”, he adds. “We have many great photographers in the city, but the people who live here don’t seem to appreciate them in the way they would in New York or London. A quarter of a mile away, there is the National Portrait Gallery of Scotland, and I asked one of the curators at the time to come along to look at the Book Festival exhibition, and I never even got a reply. It was a unique exhibition, but there was very little take-up – it was so depressing and so frankly…” Chris hesitates before adding “Scottish”.

He goes on to recount how different it is in other creative cities. Within three hours of arriving in New York, Chris got into a conversation with someone and was offered an exhibition in a gallery. The gallery was huge, and he doubted that he would have enough work to fill it. I pushed Chris to understand why he thinks Edinburgh is like this. “I don’t know, there is lots of money in the city, but perhaps the book festival audience isn’t people who are interested in design. I find it quite depressing that we are so unambitious about our indigenous talent.”

As well as owning Gallery Close, Chris is a commercial photographer. Much of his work is corporate images. However, being based in Scotland, he admits that any professional photographer has to have a broad range of capabilities. He doesn’t tend to do still life studio work, such as photographing whisky bottles for ad campaigns. If a high-end request comes in for this kind of shoot, then he’ll pass it on to a photographer better suited to that kind of work; likewise, high-fashion is better suited to someone who has a passion for that kind of imagery.

Chris’s work has taken him all over the world, shooting with clients such as Rolex. The Rolex job came along as Chris’s landscape images of golf courses had been noticed by the New York agency, JWT. There was talk of a project for a photographer being flown worldwide to shoot courses that Rolex wanted to feature in an ad campaign. While that job never came off, he was asked to supply photos of courses such as Troon and St Andrews for them. He was even asked to fly down to Wimbledon to take a picture of the hallowed grass.

We went on to talk about the challenges of shooting for clients. On one occasion, Chris was tasked with photographing a mine in the middle of the Atacama desert. After flying halfway around the world, he arrived to be told that they might not be able to take the photos as there was a possibility the mine would be closed due to a strike. His reaction wasn’t to accept the outcome but instead, look for alternatives. “What’s the contingency? What other mines are nearby and owned by the company and aren’t subject to a strike?” Quickly a plan was made to shoot at a different gold mine, and the clients received the images they were looking for. “You have to think logically and put things together to appease the client. The client will say, ‘OK, there’s a strike, but what did you do to solve it?’”

We had our chat inside the Gallery Close in Edinburgh’s New Town just after it opened. One or two customers popped in while we were talking. Chris admitted that the gallery was always a sideline. Until three years ago, his editing and printing were always done in his home. Chris wanted to have a separate office space, and when the Howe Street property became available, he could have an office in the back and pictures on sale in the front. Just like the book festival project, there was no defined plan. “I’ve been winging it ever since. I thought it was a case of putting pictures on the wall, people come in and buy…. Wrong!”. Chris confessed his degree is in Marketing, but that was in the days before social media and search engine optimisation.

The current exhibition is a reboot of one that lasted a few days before the first lockdown kicked in. Rock Stars Revisited features the work of Brian Aris, John Claridge, Peter Hince, and Chris’s photos of musicians including David Bowie, Blondie, George Michael, Annie Lennox and Freddie Mercury. 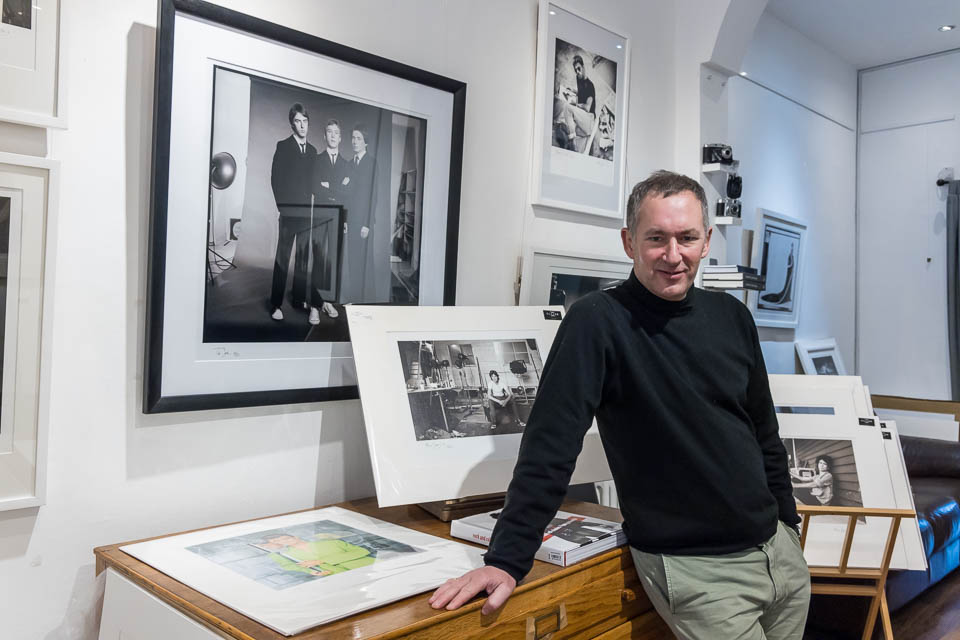 To conclude, I asked Chris what we could expect to see in the coming months. He is keen to feature an exhibition of the work of Murray Close (no relative). Murray is one of the top film stills photographers globally and has just finished shooting images during the making of the new Matrix film. However, he has a body of work taken at the start of his career when shooting on the set of the iconic British film Withnail & I. Chris also wants to feature the work of Ed Bloomfield, who was recently exhibited at the City Art Centre. His son visited Chris recently to discuss displaying some of the archive, that will be managed by the University of Edinburgh, in Gallery Close. Finally, there is a desire to have an exhibition of erotica as long as he can find suitable work for a gallery in Edinburgh’s New Town.

It is fantastic that there is a photography gallery in the city. Edinburgh was the home to some of the pioneers of photography in Hill and Adamson, and the public respond well to photography exhibitions such as Bloomfield at the City Art Gallery and World Press Photo at the Scottish Parliament. It’s unusual and frustrating then that there isn’t as much demand to buy photographic prints as there are other types of art in the numerous galleries near Gallery Close. You can support Chris by visiting the gallery at 4B Howe Street in Edinburgh. There is also an online shop at Gallery Close where you can view upcoming exhibitions and buy some of the limited edition prints.