Five from the Festival 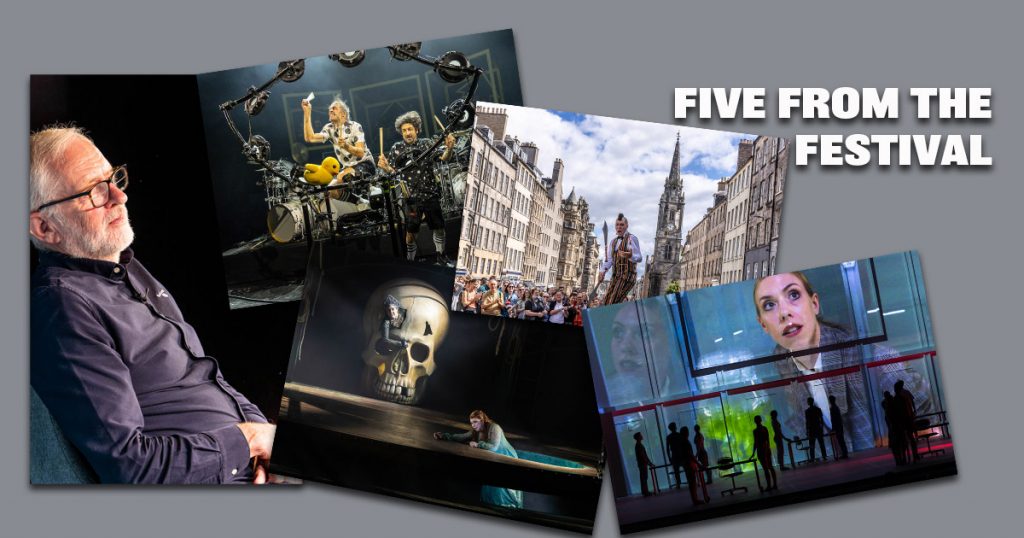 If you subscribe to my monthly newsletter (if not, why not), you’ll know I run a monthly photography challenge. The aim is to keep people who have attended my workshops taking photographs. I set a theme at the start of the month and then ask photos to be posted that meet the theme before we have a public vote to see which picture is considered the ‘best’. It’s not designed to be competitive, and the prize for winning certainly isn’t worth getting angry about, so it’s a fun place to practice photography. This month, I have set the theme as ‘Festival’ as the city of Edinburgh has numerous festivals happening during the month. As we are halfway through the festival month, I thought I’d share five of my favourite festival pictures so far and give some background on how I took them.

One of the highlights of the Fringe festival is the performances that take place on the Royal Mile. If you want to try taking photos of people (who are more than willing to be snapped), then it’s the place to be. This first shot was taken during the last Switch to Manual workshop before I closed bookings for the month. As we were walking down the High Street, I could see one of the street performers climbing above the crowds to juggle swords while on a tightrope. He’s not going to be up there for long, so I immediately cranked up the shutter speed to 1/500th. The aperture to f/10, so there would be a reasonable depth of field and then used the ISO to balance the exposure. I could then concentrate on framing the performer between the buildings on either side of the street.

This was one of three frames I fired off as he turned toward where I was standing and gave the best expression.  As it was the start of the Fringe the next day, I sent it away to the newspapers, and it was used in one of the papers the next day. 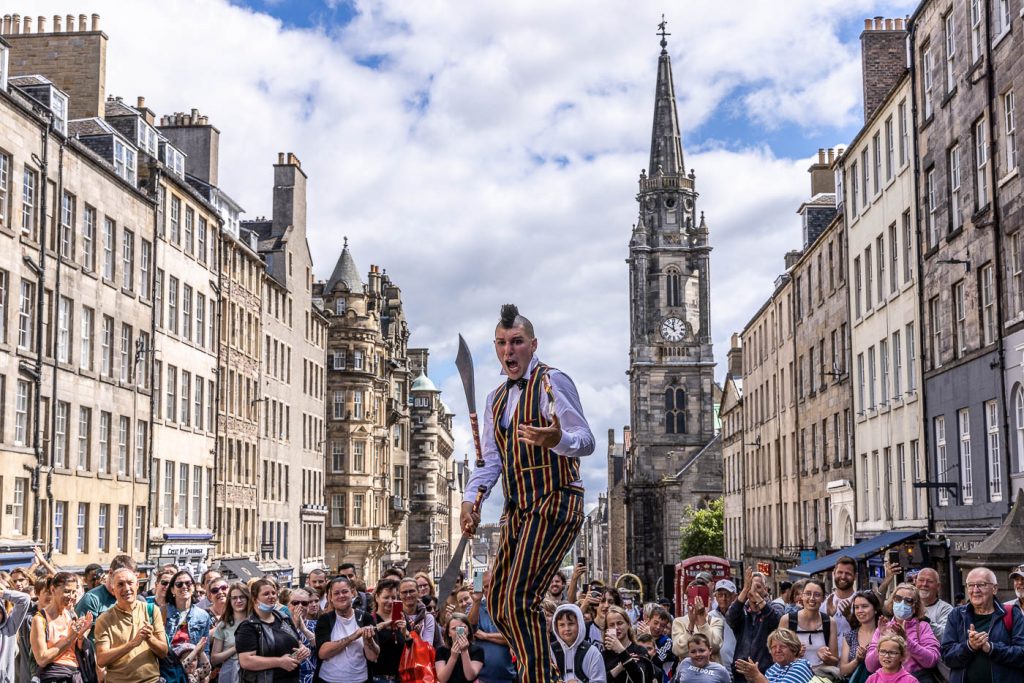 The difficulty with this performance is that the stage is huge, and there is much going on. So, as well as being focussed on the subjects being photographed at the time, you need to have the other eye scanning the rest of the stage, so you don’t miss something important going on elsewhere. Bear in mind that this picture was taken from the back of the stalls, and I spotted the performer at the rear appearing from the eye of the skull. To get the perfect composition, I had to move a few feet to drop the two performers on the two intersections of the thirds. One of the benefits of shooting professional theatre performers is that the lighting engineers do a stunning job. All I had to do once I’d seen the shot and composed it was push the shutter button as the lighting was perfect! 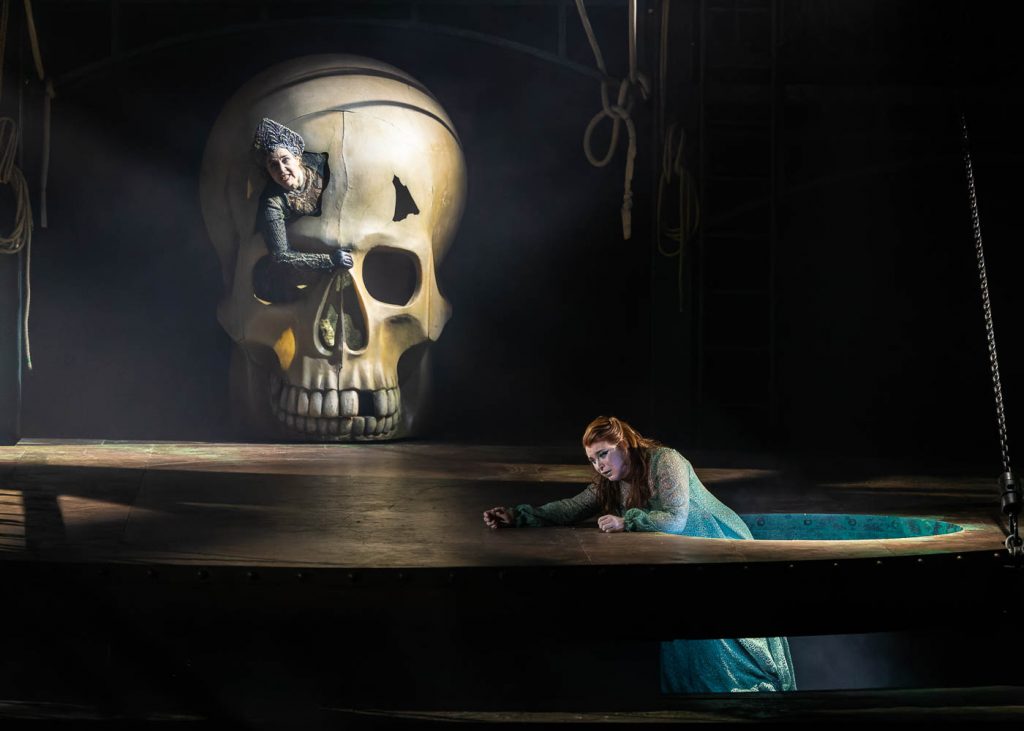 The next shot was taken at the Pleasance Preview show. There’s full public access to this one, and while I did have early entry into the venue, anyone a couple of rows back could have got a similar photo. If you want to try out performance photography (and the venue allows it), get there early and try and bag a prime spot.

One of my hobbies in the past was playing percussion. This gives me a sense of timing that means I can pre-empt when performers are going to do something interesting, as they tend to do jumps or poses toward the end of phrases. I could see the performer in white had stood on the staging behind the electric drums. It was obvious he was going to jump in the air, so I just waited until he started his leap and fired off a couple of frames that captured the performance’s movement. 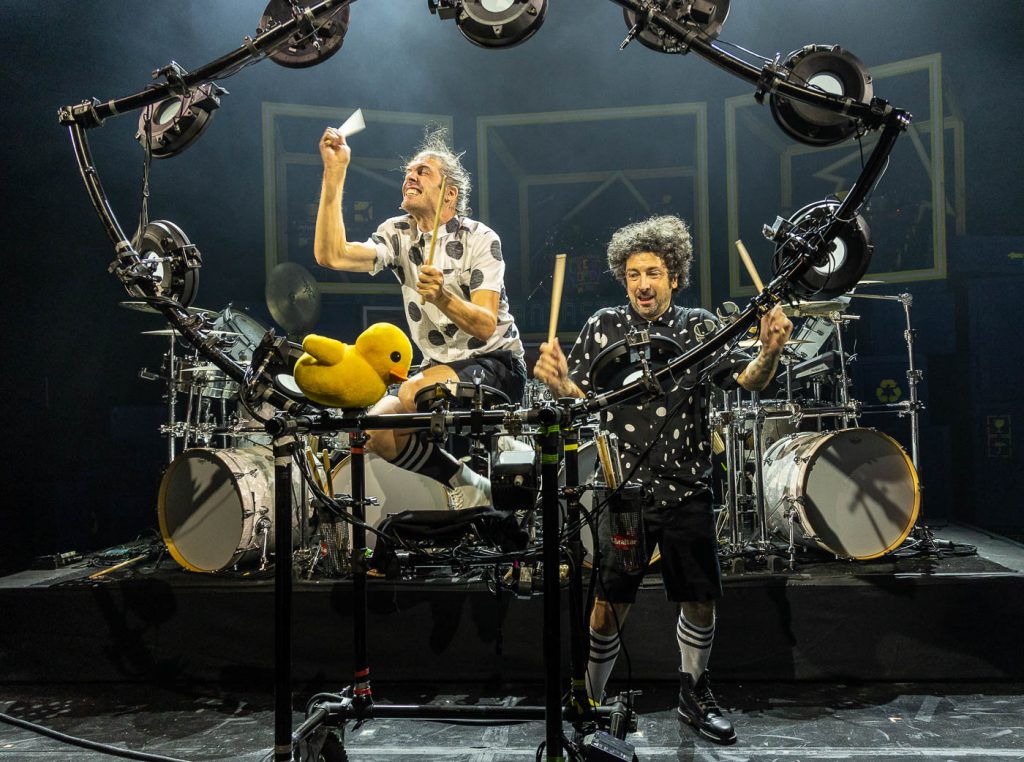 The planning for the penultimate photograph started in May of this year. Iain Dale is a presenter on LBC and was going to be interviewing quite a few famous people during the festival. I dropped him a mail and asked if I could photograph the entire run, to which he agreed. You never get anything unless you ask, and people can only say one of two things – if you are polite, they mostly say yes instead of no.

A week before the run started, I chatted with the production company and said that the photographers were always asked to shoot from a static position in previous interview shows. I explained that this didn’t get a variety of good images, that I was experienced in shooting events, and that my camera had a very quiet shutter. Again by asking, I was given permission to walk around during the chats. With 15 shows taking place, I didn’t receive a single complaint about getting in the way of people paying to see the show. Better still, the stage manager told me toward the end of the run that he liked working with me as he didn’t hear a single shutter click.

Getting the shot suddenly comes easy. I could stand stage left and take this quirky portrait of the former Labour leader leaning back and contemplating an answer. Jeremy Corbyn has such a distinctive profile that it is instantly recognisable as him and, at the same time, shows him more creatively than the usual images we see of politicians.

This final image was from the stunning world premiere of the Scottish Ballet’s Coppelia. Again, it’s taken at a dress rehearsal, but the added challenge this time was the live-action projections interspersed with the dance performance. Try taking a photo of your LCD TV screen with a fast shutter speed, say 1/500th of a second, and you’ll see that the camera doesn’t capture what our eyes see. In slow-motion, you would see the screen displaying images every fraction of a second in different colour channels and our eyes join them back together to see a ‘normal’ image. The fast shutter speed separates the channels, so you’ll see bands or unusual colours.

The same effect happened with the projections at Scottish Ballet. I had to reduce the shutter speed to slower than 1/160th so that it blended the information into what our eyes see. The problem is that dancers will start to blur if they move fast. To counter this, I tried to take photos taking place during the projections as the dancers were slowing down. In this shot, the only person moving was the one being projected, and she was going pretty slow. If you can see this ballet in the future, definitely go, as it was superb! 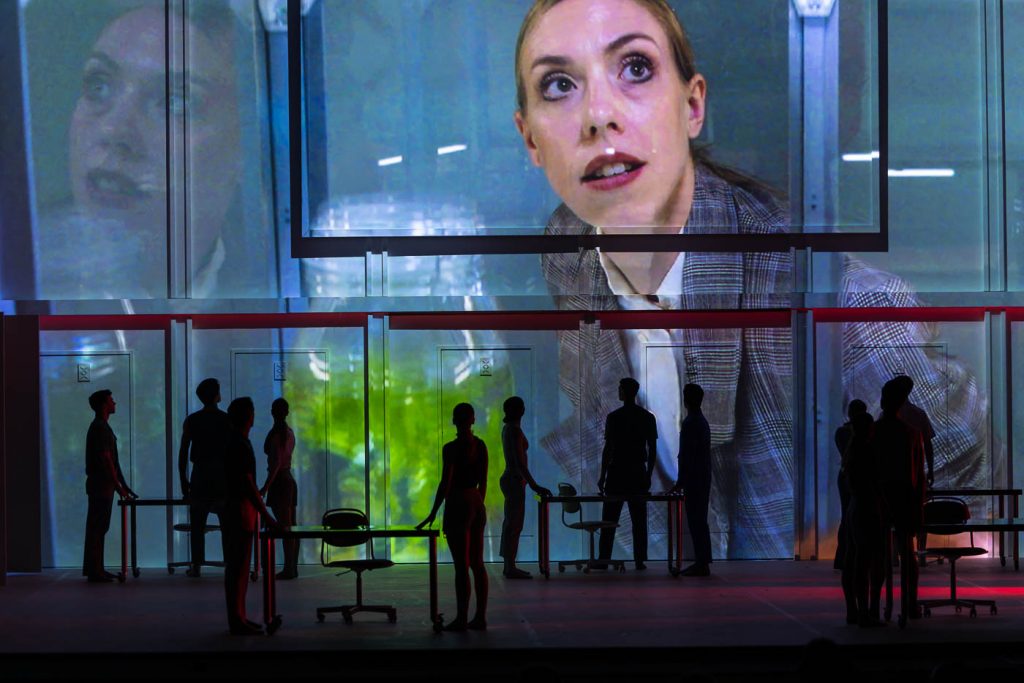 Please give us your feedback.

Why not sign up to the monthly challenge group and try your hand at photography you might not usually do? If you’ve got any questions or comments, leave them below. You can sign up for the Edinburgh Photography Workshop monthly newsletter, where you’ll get regular updates on exciting things happening in photography and some great tips. Sign up by clicking here.

As well as running Edinburgh Photography Workshop, Rich Dyson is a professional photographer. His photographs are regularly used in newspapers such as The Times, Guardian and Daily Telegraph. He also had two solo exhibitions and was featured in a members-sponsored exhibition in the Scottish Parliament. You can see and buy his photography at richdysonphotography.com.