A new way of selling photography has hit the headlines. What is NFT, and how does it work? Lee Pengelly shares his recent experience 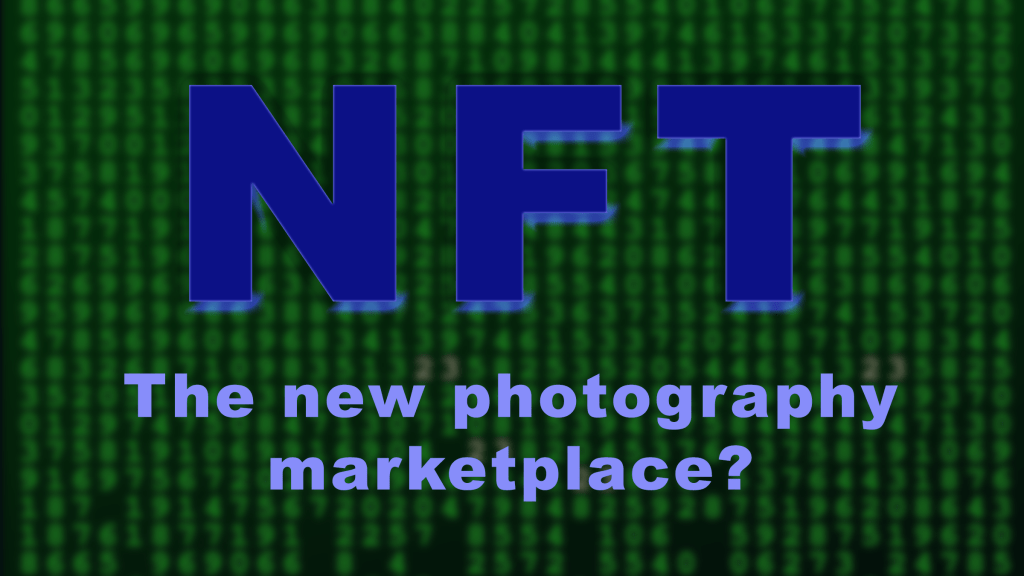 If you want to make money from photography, there are various ways to get your work out there.  You can sell prints, as I do through my Rich Dyson Photography website. You can list your photographs on an agency such as Alamy or PicFair. There’s also the functionality on 500px to list your photos for sale. However, in the last few months, a new type of marketplace has come to the fore called NFT’s. I spoke with a photographer friend, Lee Pengelly, who has recently started to sell his photography through a couple of NFT platforms to find out more.

What is an NFT?

At various stages in this article, I guarantee that you will scratch your head and wonder why NFTs have become popular. However, the easiest way to describe an NFT (or non-fungible token) is by citing an example in the world of painting and sculpture. I like the paintings of Alison Watt – she is a wonderful Scottish painter that you should definitely have a look at. When she paints a new painting, she is the creator of the work of art, just in the same way that when you take a photograph, you are the creator of that image. As Alison makes her living from art, the piece will be for sale, and somebody will buy it. That person becomes the owner of the work of art, but the creator remains Alison Watt.

There are two types of art collectors. The first appreciate pictures for their aesthetic value, and they buy them to be displayed in their homes or on a gallery wall. The second may also like the work, but they are buying it as an investment to make money in the future by selling it at a higher price than they bought it. When they sell the painting, the person who buys it becomes the new owner, but Alison remains the creator. Now let’s imagine that an owner wants to sell postcards of the art in a gallery shop. The owner will approach Alison as the creator (and copyright holder) of the artwork for permission. Usually, the artist will get paid a commission for the ability to sell reproductions of the art. In the art world, provenance, confirmation that an artist produced the artwork is essential. Things such as invoices of each sale trace the current owner back to the creator.

Now, let’s apply this to a digital piece of art, such as a photograph. Once it is online, there is nothing stopping someone from right-clicking on a picture and downloading it to their hard drive. That doesn’t make them the owner of the image, and indeed if they then go on to publish it somewhere else, they have broken the copyright for the photo and could be approached to pay for the use of the image. NFT acts as a certificate of ownership. When the purchaser buys the photograph from the NFT platform, they purchase the digital evidence that they own the photo produced by the creator.

I did say that you’ll be scratching your head, and here’s why. You can’t touch an NFT! The NFT is a piece of digital code stored in a blockchain. There is an excellent description of a blockchain on the website Investopedia. The NFT is stored in a digital wallet which can also hold digital currencies such as Bitcoin and Ethereum, which also use the blockchain concept.

The purchaser pays for the NFT in a digital currency when the photograph is sold, usually Ethereum. The creator can then convert this to ‘real’ money by withdrawing Ethereum from the digital wallet.

It’s here I’d like to introduce Lee Pengelly. I first came across Lee when I was attending a photography workshop in 2013. We spent two enjoyable trips in Slovenia and Iceland, and I’ve been following him since then. In July, I noticed that he posted on Twitter about using an NFT marketplace, so I reached out to him to hear about his experience. Lee admits that he is pretty new to selling NFTs,

His introduction to the NFT concept was through a conversation with another photographer on a demonstration workshop they were running together. Following the discussion, Lee carried out some additional research and decided to dip his toe into selling photos. One of the first things he noticed was that there isn’t a rule book on using NFT.

Lee lists his NFT images on a couple of marketplaces, Foundation and OpenSea, and I could see that despite starting selling in July, he had already made quite a few sales. I asked how he had achieved this success. Lee said, ‘this is the most important thing, the community side of it that drives it is all based around Twitter. All the creatives are using Twitter, and unless you engage with and share both your work and other artists’ images, it won’t work.’ Lee continued, ‘the strange thing about the NFT market is that there’s no competition. It doesn’t matter who you are; whether you’re a new photographer or an established one, you need to come in and drop your bags at the door and start from the bottom.’

How to sell an NFT

I asked Lee how someone could start selling their own NFTs. His advice was that you need to do your research first and understand the various platforms as much as possible. Each platform can have a slightly different pricing model for selling your images, and they can equally target different types of imagery or collectors. Business Insider lists a number of the marketplaces available.

Using the largest NFT marketplace as an example, you will need to buy a supply of a digital currency such as Ethereum, add it to a compatible digital crypto wallet and then link the wallet to an account on the platform. There is an easy guide available on the Opensea FAQ pages.

Once you have signed up to a platform, you will need to upload a high-resolution version of the image you will sell. A process called ‘Minting’ now starts, which is where the image file gets attached to an NFT. Depending on the platform you use, there may be fees charged to mint an NFT, so make sure you understand the costs. Finally, the item is added to the site, where purchasers can then buy your NFTs. I asked Lee how he decided on pricing his photographs, particularly as just this week, a collection of NFT’s known as the Bored Ape Yacht Club sold at Sotheby’s Auction House for $24.4 million. Health warning here, you will not be selling your photos for millions of dollars. Instead, look at the price similar images are being sold for and price your work realistically. 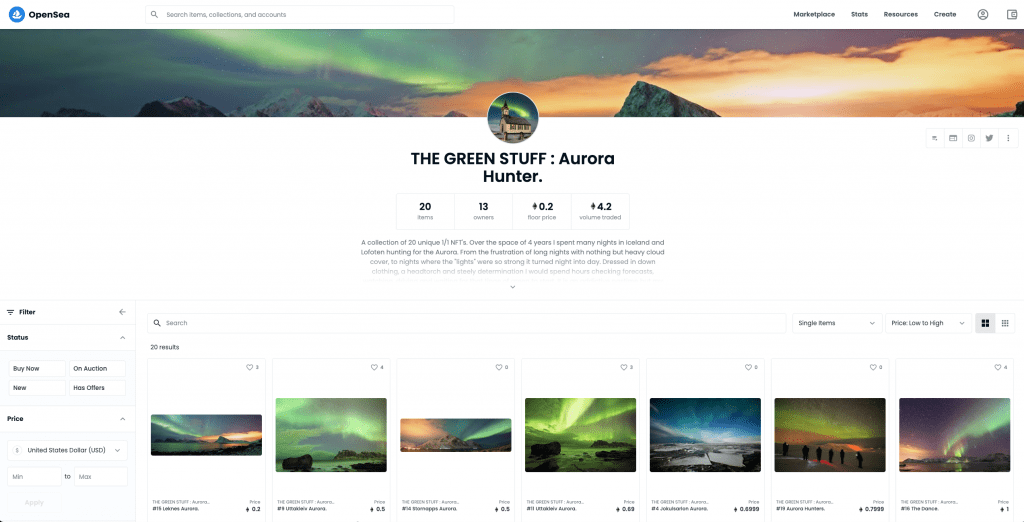 The unusual aspect of NFT’s is that there is also a secondary market. Unlike the example at the beginning, as the creator of an image, you can set a commission rate that you will receive each time your picture sells. Lee sees as much income coming in from secondary sales, where he receives 10% of the selling price as he does from the primary sale.

It sounds too good to be true

There is a well-known saying that if something sounds too good to be true, then there is probably something wrong. Lee admitted that there are several things that you need to be aware of and enter selling NFT’s with an open eye. First of all, there is a lot of computer programming that goes into creating an NFT. There are server farms worldwide processing blockchain information using immense amounts of electricity. There is a real problem at the moment with the carbon footprint this process takes, and particularly as COP26 is going to take place in Scotland later this year, this is very much a live issue. Lee mentioned that there is work on-going to create Ethereum 2.0, which aims to reduce the processing power to support the creation of the Blockchain.

Secondly, as the platforms are all built on cryptocurrencies, they are subject to the volatility of the currency. Twelve months ago, the price of 1 Ether was £287.35, and today it is sitting at £2,471. However, in the last five days, the price has reduced by over £400. The currency fluctuation impacts the amount you’ll receive for your photo and the fees you’ll pay. 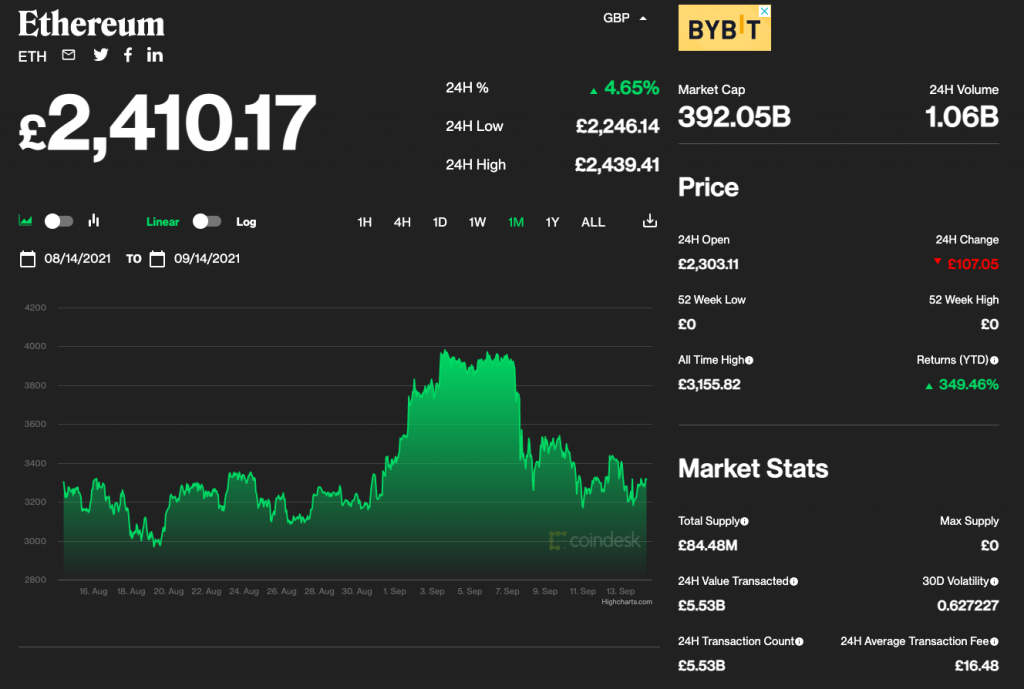 Finally, Lee highlighted that selling NFT’s can be addictive. It can, and has, led to some sellers suffering from mental health issues as they track the sales and price of their NFT portfolio, particularly when activity on their NFT’s reduces for a few days or even hours. This particular aspect isn’t peculiar to NFT’s though. We both reflected that when 500px was initially launched, many photographers were panicked when the number of likes on an image wasn’t as high as they thought it should be.

Are NFT’s for you?

The blog this week has been an interesting one to write. I usually start from a point of understanding when I tackle a subject. In this case, while I was aware of NFT’s, my knowledge was at best rudimentary. Chatting with Lee Pengelly to understand his practical, albeit short, experience gave an invaluable insight into the topic from a photographers’ perspective. Additionally, following up on the conversation with additional research has filled in a few more gaps in my understanding. However, in no way would I consider myself an expert on the NFT market now. While I may dip my toe into selling my work this way, it will be with an element of caution. There are many risks involved in terms of pricing and costs and the volatility of the crypto-currencies that the platforms rely on. If you are tempted, take Lee’s advice and do your research, understand the market you are entering and take cautious steps until you are comfortable with NFT’s.