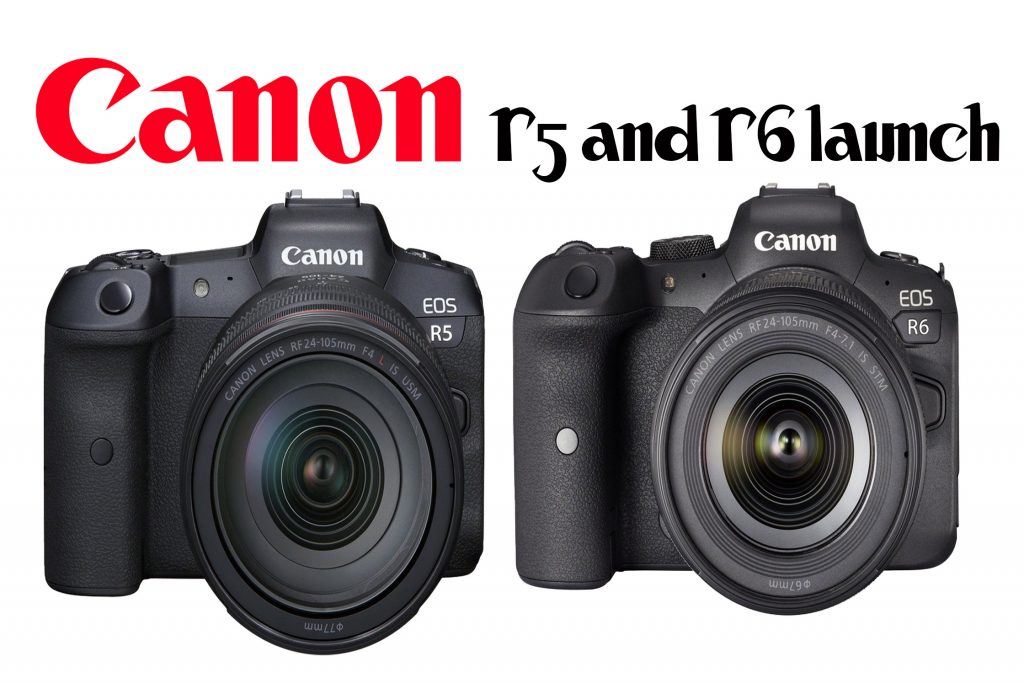 In February of this year, Canon put out a statement to say that they were developing a camera called the R5. The specs in the first press release made it look like it would be a beast of a camera. In April, more information to confirm that there would be some spectacular video specifications included. At the same time, rumours also started of a brother/sister camera to the R5 that would be called the R6. Last Thursday, Canon finally (kind-of) unleashed the two models to the general public. We’ll get to see them in the magnesium, rather than the flesh, at the end of July and August.  Very few photographers have used the two new models so I thought it would be good to look at the specifications of the two cameras.

Before we look at the two new cameras, it’s good to add a bit of recent history to Canon’s camera launches for a bit of context. 2020 should have been an Olympics year, and that means all the major camera manufacturers launch a new flagship camera. February saw the launch of the Canon 1DX Mk III to substantial critical acclaim. It was faster at 16 frames per second, the autofocus was lightning quick, and the new DIGIC x processor was market-leading. I currently use the 1DX Mk II, and EOS R. Both my current cameras are old hat, replaced in the space of 6 months.

With all the hype for the last six months, Canon had to deliver a fantastic camera. The European event featured Richard Shepherd, the Senior Manager of Professional Product Marketing at Canon Europe as well as some of the photographers who have used pre-production versions of the camera. Ulla Lohmann, an adventure photographer, Ivan D’Antonio, a filmmaker, Robert Marc Lehmann, a wildlife photographer and filmmaker, Martin Bissig who is an action and sports photographer and Canon Ambassador. It’s quite clear that the event was going to be targeting stills photographers who are capturing movement in hard to get and challenging conditions as well as filmmakers who demand the best quality imagery. 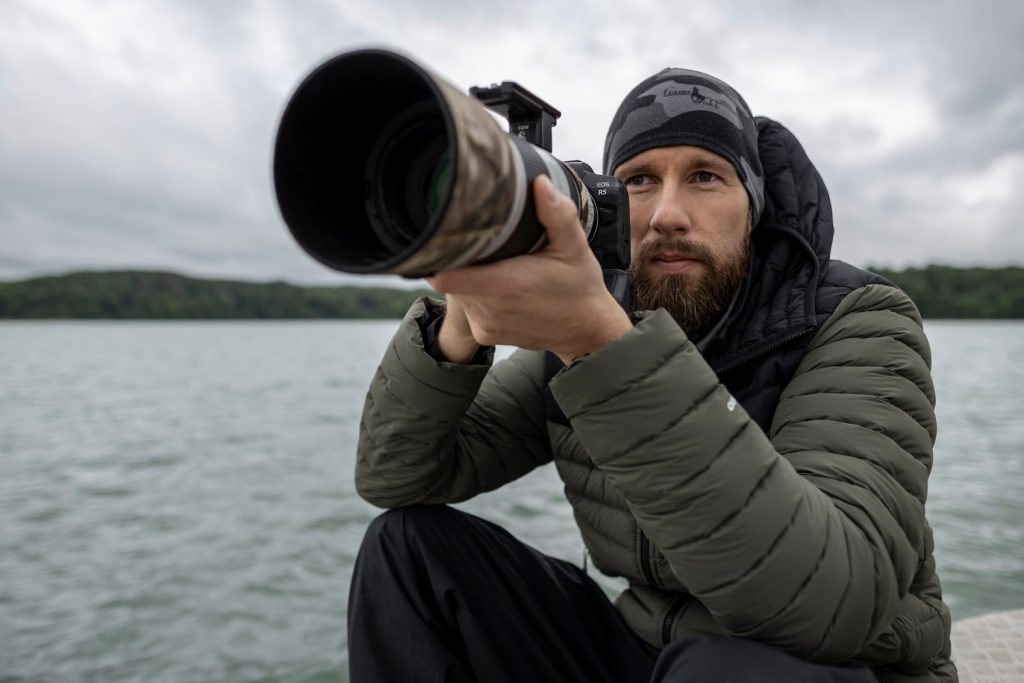 The first element of camera performance featured in the launch is the auto-focus system. Canon appears to have taken the game-changing 1DX Mk III system and then made it better! Canon has added in deep-learning artificial intelligence technology to get even better auto-focus performance. The camera recognises the eyes of birds, animals, and humans then lock onto them, so you get perfectly sharp photos every time. Not only that, but it also recognises bikers or skiers in helmets too and delivers super-sharp pictures.

Add to this superb auto-focus performance 12 frames per second (fps) shutter speed using a mechanical shutter and 20 fps when using Live View and you have a top-notch sports and wildlife camera. When shooting Live View, it looks like the R5 can easily rival the flagship 1DX Mk III. Don’t forget the R5 is going to retail at £4,199 in the UK, compared to the £6,499 for the 1DX Mk III.

The value gets even better when you look at the size of the photos. The 1DX Mk III delivers 20.1 megapixels. The R5’s massive sensor blows this away with 45 megapixels. File sizes like this can almost rival a medium format camera. These beauties are going to be amazing in the studio as well as out in the field.

That’s all great for stills photographers. If you are interested in shooting video, then the R5 is going to suck your wallet out of your pocket and empty it into the Canon coffers. For the first time in a camera this size, full-frame 8K video is part of the specification. So, what you may say, 8K TV’s are ridiculously expensive so why would I shoot video in that format. Ivan D’Antonnio counters this at the launch event by describing how to shoot in 8K allows post-processing editing of footage to crop in, while still retaining mind-blowing quality.

If you’ve attended one of my Switch to Manual workshops, then you’ll know that I recommend that the shutter speed to handhold should be one over the largest focal distance on the lens. I may just need to re-evaluate this based on the images shown during the camera launch. For the first time, Canon has introduced image stabilisation in the camera body. The specs say that it offers eight stops of stabilisation. So let’s say you are using a 200mm lens, I’d generally recommend that you could handhold at 1/200th of a second. With this new In-body Image Stabilisation (IBIS) it should be possible to achieve the same results at 1.3 seconds! Remember though that while it may be able to stabilise on static things, anything moving will still blur – don’t expect to get pin-sharp ballet dancers jumping in the air at ISO 100 just because you are using this fantastic IBIS feature.

Is the R5 perfect?

Now let’s look at a few of the downsides. Firstly to shoot 8K video, you’re going to need to use the  CF Express card slot and not the Ultra-fast SD card. The 8K video files are going to be chunky so you’ll need lots of storage in your camera. That comes at a cost – a 512GB card is nearly £700 on Amazon. Not only that but your computer storage is going to get full pretty quickly, so you’ll be upgrading NAS drives too! It would be quite easy to add another £1,000 to the cost of the camera.

Next, we have the controversy of over-heating when shooting 8K. Canon Ambassador in the US, Peter McKinnon tested a pre-production version of the R5 and declared that the camera was getting hot when shooting 8K for an extended period. Canon appears to have verified that shooting over 20 minutes in both 8K and 4K can lead to an over-heating issue. I would never badge myself as a videographer, but I have recently been doing a wee bit of movie-making, and most of my takes were less than 5 minutes. I’m sure my movie-making friends might tell me differently, but this doesn’t seem a significant fault.

My last bug-bear with the R5 seems to be something that Canon is going to pursue long-term. I love that my 1DX Mk II records the GPS position of every photo I take. It is excellent for travel photography, as you can research the locations you’ve been after the event. I use the data to add keywords when I send my pictures to agencies, so it helps get additional sales. Unfortunately, the R5, like its predecessor, the R doesn’t have GPS built-in. Instead, you need to create a connection to your mobile phone and let it collect the GPS info and send it back to the camera. I’d rather have a little extra weight and a reduced battery life to have this feature built-in.

Without being able to try this new camera, it looks like Canon has brought out something extraordinary. Indeed, the press comment since the launch suggests that Canon now leads the pack in mirrorless cameras. I can’t wait to try it. However, the price tag of over £4,000 means that I’ll need to think long and hard if I need all these new features. If only I could get all the stills features for a little over half the price, then it may be appealing. Well, maybe, I can.

Almost in the background, Canon was developing a smaller sibling to the R5. Canon launched the R6 alongside it’s bigger brother/sister. The manufacturer hadn’t trailed the R6 as much, so the specs of this camera were a little less known. The launch used a different set of Canon ambassadors, Javier Cortes, a filmmaker, Wanda Martin, a fashion and music photographer and Samo Vidic, an adventure photographer. This expert list seemed to mirror the R5 ambassadors, and it soon became clear why. 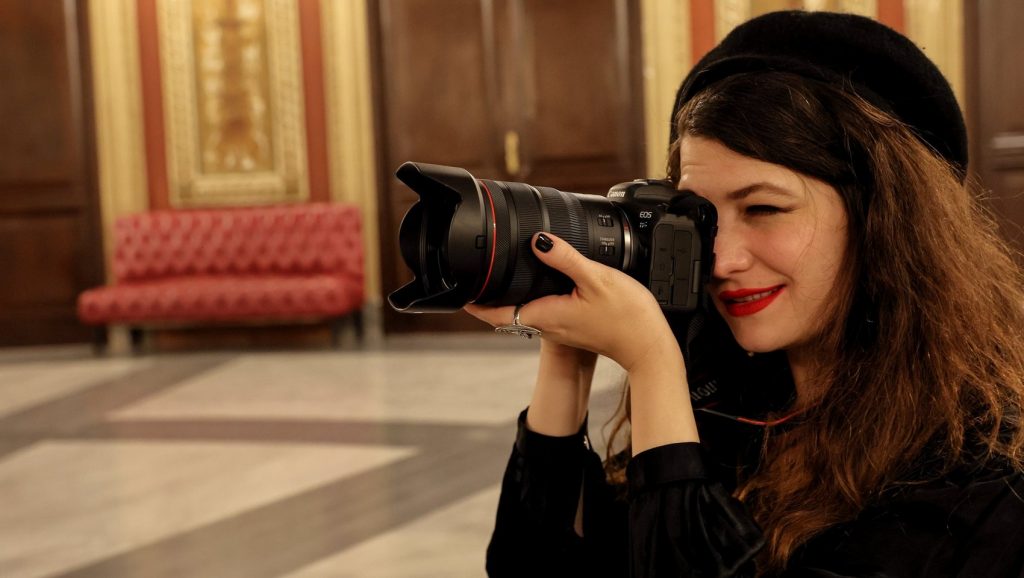 Remember, the new stand-out features of the R5? That superb autofocus system that latches onto the body, eye, face and animal features through deep learning – the R6 has got it too. Twenty fps in live view and 12 fps using the mechanical shutter – yes, the R6 has that. Eight stops of image stabilisation – it’s on the R6 as well. All the features a stills photographer may want are included in the specs of this little beast.

The things it doesn’t have compared to the R5 are 8K video, a CF Express card-slot and almost half the megapixels. I’m primarily a stills photographer, so I am comfortable that these features aren’t there. The only reason you would need a CF Express card is to shoot 8K video, and as I won’t be doing that, then I don’t need the card. Instead, the R6 has two High-Speed SD slots which means that if I am shooting a wedding, I’ll have a back-up card recording the event at the same time – that sounds like a win-win to me.

Let’s then look at the gap between the 45 megapixels of the R5 compared to paltry 20.1 megapixels in the R6. Surely, more megapixels are better? Well not necessarily – as you add more pixels to the sensor the camera gets even better at reproducing noise on the images. By shooting smaller pictures, the noise gets hidden, and you get cleaner photos. Sure, you won’t get the same quality when the photo is on a billboard, but I doubt many of us are going to have that problem. It’s the same sensor as you find in the flagship 1DX Mk III but with a better autofocus system! 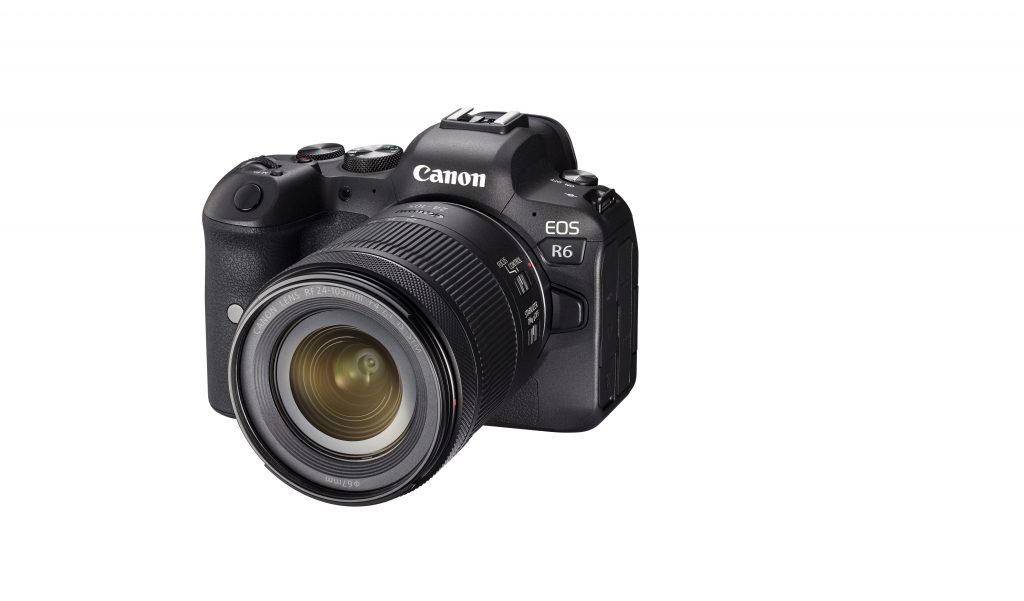 It seems that the R6 offers everything that I’d want in the R5 for a reduced price. The list price for the R6 is £2,499, which is still a chunky weight out of your pocket. When you consider it’s giving you pretty much everything and more than the Canon 1DX Mk III has with a lighter body (and probably a little less robustness in bad weather), it seems like a bargain.

Which will I buy?

The honest answer at the moment is that I don’t know. Canon seems to have created a marketing problem by being so good. From a purely functional perspective, the R6 looks like it will cover all my bases for the kind of work I do. I’ll be able to sell a couple of 1DX cameras and fund the purchase of two R6’s in return, and I’ll be literally taking a weight off my shoulders! Come the end of July, and I’m going to be hiring one of each to test out in the real world to see which works for me. I can’t wait to try them as Canon looks like it has set the bar high for Sony and Nikon to compete against.